City centre shops and malls may have lost their lustre during the COVID-19 pandemic, but as lockdowns ease across Europe many stores in and around residential areas stand to benefit as consumers remain reluctant to venture far from home.

While retail sales appear to be rebounding – surging 17.8% in the euro zone in May and approaching pre-lockdown levels in Britain in June – shoppers are increasingly staying local, leaving Europe’s most renowned shopping districts from London’s West End to Berlin’s Kurfürstendamm struggling in the absence of office workers and tourists.

On Germany’s main shopping streets in Hamburg, Cologne and Berlin, footfall in June was as much as 50% lower than a year earlier, according to the German Retail Federation, while in London’s West End it was down 75%, according to the New West End Company, an association of retailers and landlords in the area.

Many consumers have shifted to buying goods online, but they are also heading out to shops in residential areas and 46% of consumers across Europe aim to shop more locally in the long term than they did before the pandemic, data from Ernst & Young shows.

The trend could mean a significant shift in earnings patterns for major European retail landlords such as Unibail-Rodamco-Westfield, Klepierre, and Carmila with their mix of city centre and suburban shopping malls.

Germany’s ECE operates nearly 200 shopping centres across Europe and told Reuters that centres in areas with a local customer base are approaching pre-lockdown footfall levels – whereas city-centre locations were serving just two thirds of their usual customer base.

In Britain, shoppers are buying local not just for convenience goods, but other items such as clothes which they would usually buy on a day out in the centre of town, said Jonathan de Mello of retail consultancy Harper Dennis Hobbes. «People are being very careful about where and how many times they shop,» he said.

Half of Britons in a YouGov survey of 1,032 people said they would now feel uncomfortable visiting an enclosed retail space like a shopping mall.

«What was once a fabulous shopping experience at a central location is now actually just a place full of risk,» said Andrew Cosgrove, global consumer lead analyst at Ernst & Young.

At retail locations in central London and bigger UK cities footfall between 14 June and 12 July was between 69.2% and 75% lower than the same period last year, according to analytics firm Springboard.

Local high streets in smaller towns saw a 42.1% drop and suburban outer London a drop of 40% – around a third better than central London fared, if still a substantial loss on last year.

The loss of city centre business has already prompted big retailers to retrench, notably in Britain where Marks & Spencer and John Lewis among others have announced store closures and hefty lay-offs.

Some smaller retail chains that were struggling before the pandemic have collapsed, while mall operator Intu Properties , owner of Manchester’s Trafford Centre and already battling high debt, was forced to bring in administrators.

In France, Denmark, Germany, Finland, Norway, Sweden and the UK at least 40% of people are visiting physical stores less, according to Ernst & Young – and only 20-35% are ordering more online, not enough to make up the shortfall.

A recent rebound in sales as lockdowns have eased has also not been as robust as retailers might have hoped for.

Springboard estimates that in the week beginning July 6, overall footfall at retailers across continental Europe remained around a fifth below the same week a year ago, and 40% lower in the UK, according to data shared with Reuters.

Fashion and footwear are the hardest-hit retailers, with spring and, in some countries, summer collections gone to waste in lockdown. Clothing and footwear sales surged 70% in Britain in June from May but remained 35% below pre-pandemic levels, data released on Friday showed.

In countries like Spain and Portugal still facing partial or regional lockdowns, due to localised coronavirus outbreaks, movement around retail and recreation spaces such as shopping centres as well as restaurants and cafes remains 20% below pre-lockdown levels, Google mobility data shows.

For retailers across the board that suggests there is more pain to come.

In Germany, Europe’s biggest economy, a third of 400 brick and mortar shops surveyed feel their existence is under threat, according to June research by the German Retail Federation.

«If we consider that Germany is a comparatively strong economy in Europe, it’s a worrying indicator for the region,» said Neil McMillan, director of political affairs & trade at Eurocommerce, a retail lobby group.

The talks were held one week after Erdogan’s declaration in occupied Cyprus that he will open about three percent of the Turkish-occupied ghost city of Varosha in violation of UN Security Council resolutions.

Pascal Donahue speaks to OT.gr: Ireland can not lose its tax advantage

The Irish Minister of Finance was present at the Economist conference as the President of the Eurogroup and answered our questions about his country’s position on the issue of introducing a minimum global corporate tax.

Tripartite Summit: “Greece, Cyprus and Jordan have deepened their cooperation”

The Prime Minister referred to the expansion of the partnership between the three countries, the strengthening of their cooperation and the promotion of their coordination in political and economic issues, but also in the field of security.

DBRS: The resilience of the Greek real estate market [charts]

What DBRS Morningstar says in its analysis

The Greek 10-year rate ranges from 0.6% to 0.9% in early July, with estimates showing its maintenance for the whole summer 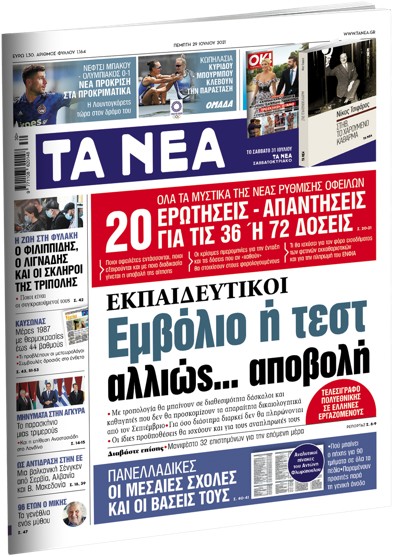