The new crane bridge in combination with the new electric crane bridges, which are also expected, will increase the capacity of Pier I by 30% and 1.3 million TEU per year

The new Super Post Panamax Ship Loading and Unloading Bridge Crane has arrived at the Port of Piraeus. The bridge crane can serve mega container ships of 20,000 TEU and is intended to be installed in Pier I, according to a relevant announcement.

The supply of the new Bridge Crane  is part of the broader planning of the Piraeus Port Authority (PPA SA) for the expansion and upgrade of the infrastructure of the Port of Piraeus and aims at improving productivity and upgrading the services provided.

Specifically, this significant investment by PPA SA. is expected to lead to a significant increase in the capacity of Pier I but also to enhance the operational operation of the Container Station, as it contributes to the more efficient and faster management of large transport vessels. 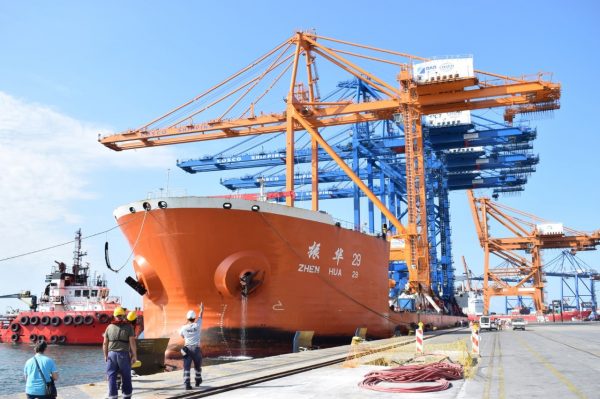 The new Crane Bridge in combination with the new electric crane bridges technology, which are also expected, will lead to an increase in the capacity of Pier I of 30% and 1.3 million TEU per year.

It will take about 4 days to unload the Crane Bridge and install it on Pier I, which can be raised up to 46 meters, while it is estimated that it will be fully operational around mid-August 2021.

The President of PPA SA Mr. Yu Zenggang, expressed his satisfaction for the timely realization of an additional important and necessary investment, which is consistently part of the planning and wider planning of PPA SA. with the aim of increasingly improving and upgrading the infrastructure and services provided by the Port, emphasizing the contribution of the new Crane Bridge to the even more efficient operation of the first Mediterranean Port in relation to the management of large cargo ships.