With the railway now taking a place at the top of the infrastructure agenda, the Ministry of Infrastructure and Transport is putting the country’s new generation of projects on track. In the middle of this summer, the rhythms for the infrastructure program intensified instead of relaxing. The auction of four railway projects, with a budget of 373.9m euros, picked up the baton in the autumn. Next big stop is the huge package of new railway projects, amounting to 3.3 billion euros, which is expected to be released in the near future.

A total of 2.3 billion euros of projects have already been contracted by the large program, totaling 13 billion euros, aimed at rebuilding construction. Within the next two years, projects over 8.5 billion euros will have entered the starting line, according to the plan, with the completion of the roads and the flood protection occupying a large part.

Greece’s strategy, as Minister of Infrastructure and Transport Costas Karamanlis often emphasizes, is to make Greece a hub for growth and infrastructure for Southeastern Europe, focusing on the major ports of Piraeus and Thessaloniki. The shift of international production in Asia, mainly in China, puts Greece through Piraeus in the shortest corridor to Central and Northern Europe, creating new perspectives. A necessary condition for the success of this wager is the railway. The connections with the main ports of the country as well as with the ports of the Black Sea are at the heart of the design. In this plan, Thessaloniki mainly, but also Alexandroupolis, are gateway ports for Southeastern Europe and Piraeus is the major port of entry to the Old Epirus.

With the six projects that ERGOSE has ready to announce, with the method of competitive dialogue, the ports of Patras, Lavrio, Rafina, Thessaloniki, Kavala, and Alexandroupolis will be connected by train and the eastern railway Egnatia to Ormenio will be “closed”.

The Ministry of Infrastructure and Transport is very close to the “closing” of the agreement with TRAINOSE for the infrequent railway lines, amounting to 750 million euros, for 10 + 5 years. An agreement accompanied by a commitment of investments of about 2.5 billion in the Greek railway, while it is expected to stimulate competition in cargo as well. One of the main issues that entered the negotiating table with the company, which dominates the Greek rails, but now also in the maintenance of rolling stock, was the opening to new players.

Northern Greece in the spotlight

The top development of the summer was certainly none other than the white smoke for the concession of Egnatia Odos for a period of 35 years. The emergence of the GEK TERNA – Egis Projects scheme as a preferred investor, with a price of 1.49 billion euros and a total benefit for the Greek State of over 2.7 billion, essentially turns the page on the infrastructure of Northern Greece.

The railway Thessaloniki – Kavala – Sagittarius included in the above plan of ERGOSE will contribute to this, as well as the PPPs for the upgrade of the roads Thessaloniki – Edessa, Drama – Amphipolis, which are expected in the autumn. Also, the start of works in the northern part of the E65 at the end of August, after 10 years of uncertainty, brings closer the connection of Central Greece with Egnatia and from there with Central Europe. The last 70.5 km of the highway is expected to be ready by the end of 2024.

However, one of the main issues facing the ministry in order to achieve the vision of completing the country’s roads is the Patras – Pyrgos axis. What remains for the reintegration of the axis in the concession of Olympia Odos is the final approval of DGComp.

Meanwhile, the PPP of the Kalamata – Pylos – Methoni axis, worth 250 million euros, entered the phase of the competitive dialogue, with the contractor expected in 2022.

The gem in the crown, however, is none other than the Northern Road Axis of Crete. A project that exceeds 1.8 billion euros. The preparation of the competitions has increased in the last one year, so it is estimated that the competitions will have matured by the end of the year. Probably by the beginning of 2022 the tender for the section Neapoli – Agios Nikolaos as a public project will be released.

Metro and Flyover are casting a spotlight on Thessaloniki

In the foreground are, due to the Thessaloniki International Fair (TIF), the projects that will renew the profile of the city. The works in the Thessaloniki metro are now progressing intensively, while the operation of detaching the antiquities from Venizelos Station is expected to start. Time is already running backwards for the operation of the metro aiming at 2023. Thus, in the last two months, Attiko Metro has been carrying out daily test routes from the Pylaia depot to Sintrivani.

Also, in the coming days, the project for the Thessaloniki metro operator is expected to be approved by the Interministerial committee. The contractor will undertake to “run” the network for about 10 years. A model that, although common abroad, will be implemented in Greece for the first time. It is considered to contribute to the effective management of staff.

The tender for the PPP of the elevated regional Thessaloniki highway, known as Flyover, with a budget of 462 million euros, is also in progress, which is expected to enter the bidding phase, probably by the end of the year. At the level of interconnection, the arrival of the train at the 6th pier of OLTH and the construction of the Suburban Railway of Western Thessaloniki in city train style is in the planning for autumn.

How the Commission unblocked the investment in Thriasio

The concession contract for “Thriasio I” is in the final stages for official approval by the Commission in September. The initial acceptance by DGComp paves the way for the investment to be unblocked after 2 years. In order to resolve this “Gordian knot”, as the Commission considered that the one ratified by the Parliament on the previous government contained elements of state aid to the contractor scheme ETVA VIPE – Goldair, the Ministry of Infrastructure had to renegotiate.

Twelve amendments provided the solution. The initial consideration to be paid by the concessionaire has doubled to 20 million euros. However, the annual payment to the developer, GAIAOSE, also increased from 2.51% to 5% of the gross annual revenue for the entire concession period. Also, the annual guaranteed consideration was doubled from 350,000 euros to 700,000 euros.

The duration of the concession was reduced from 60 years to 37 with the possibility of extension for another 23. However, a new term is introduced in the contract. This is based on the calculation by DGComp of the Internal Rate of Return on Investment (EQUITYIRR) at 9.09%. Thus, the profits after taxes that arise for the concessionaire (ie after the return on equity of 9.09%) will be distributed on an equal basis 50% -50% between the concessionaire and the developer.

The contract stipulates that preferential building conditions do not apply exclusively to GAIAOSE, a provision that caused reactions. It is also stated that the commercial agreements of the concessionaire for the operation of the freight center will not work to the detriment of the payments to GAIAOSE.

In addition, each transaction of the concessionaire with Piraeus Bank will be checked by the Independent Authority for State Proceeds to determine whether it meets the principle of equal distances.

It is recalled that the agreement between the ministry and the concessionaire led to the doubling of Goldair’s stake, reaching 40%.

The president of the Earthquake Planning & Protection Organization, Professor Efthymios Lekkas, noted that this is an earthquake that confirms the wider agitation in the region, something that can give facts but in the sea

The president of the Earthquake Planning & Protection Organization, Professor Efthymios Lekkas, noted that this is an earthquake that confirms the wider agitation in the region, something that can give facts but in the sea

Message to Ankara from Greece, Egypt and Cyprus – What will be discussed at the tripartite summit

It is noted that these alliances – and the wider developments that deconstruct the Turkish narrative of the “Blue Homeland” – have irritated the Erdogan government, which once again resorts to distortion of reality and threats.

There have been 3,164 newly confirmed cases in the last 24 hours (15 at points of entry into the country) and 43 deaths, bringing the death toll since the beginning of the epidemic in Greece to 15, 418. 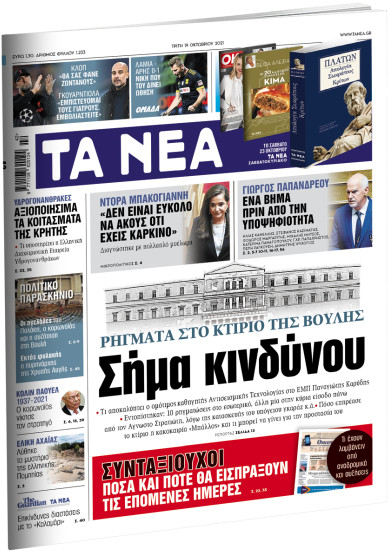