The Celebrity Beyond cruise ship arrived in Piraeus on Wednesday morning. The ship is 327 meters long and 39 meters wide, has 21 decks, and can carry 1,416 crew members and up to 3,937 passengers.

Celebrity Cruises’ newest ship is captained by Kate McCue, who was one of the first women and the first American woman to head a cruise ship.

This is the third ship of the Edge class, which was built a few months ago in the French shipyards Chantiers De L’Atlantique, while its maiden voyage to the Mediterranean began last April. Celebrity Beyond is slightly larger than her sister ships, Edge & Apex. The company has ordered two more ships of the same class from the French shipyards, the Celebrity Ascent to be delivered in November 2023 and the fifth and last of the class in 2025. 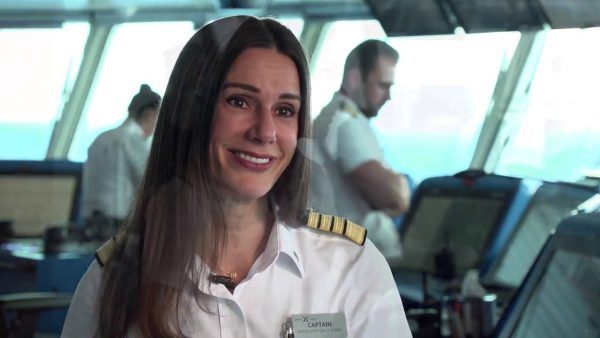 Kate McCue (born January 6, 1978) is an American cruise ship captain, currently employed by Celebrity Cruises. She is currently the captain of the Celebrity Beyond.

When she became the commanding officer of Celebrity Summit in 2015, it was the first time that an American woman had been named captain of a “Mega” cruise ship. Prior to her time at Celebrity, she had worked as an officer for both Disney Cruise Lines and Royal Caribbean.

The women of Iran are demanding what should be self-evident: That they should decide for themselves whether or not to wear a head scarf, not because it is imposed by an authoritarian “morality police”.

Erdogan’s attack against our country at the UN constitutes a turning point in the communications strategy that the Turkish president has steadfastly implemented.

Georgia Meloni may admire Viktor Orban and have allied with Matteo Salvini and Silvio Berlusconi, yet in the coming years she will need Brussels in managing the country’s huge debt and recovery funds.

Although he touched on a number of issues in his address, it was Mitsotakis’ response to what he called “preposterous” statements and claims by Turkish leaders, including by Turkish President Recep Tayyip Erdogan, that served as the highlight

Mitsotakis at UN appeals to Turkish people: ‘We are not your enemies, we are your neighbours’

Mitsotakis said that Athens will unswervingly defend its red lines against Turkish revisionism and threats against the territorial integrity of Greece’s Aegean islands, which Turkey has persistently been challenging.

What is certain is that the courage of all those who took to the streets in Iran marks a turning point for every regime that insists on not respecting the rights of women.

The management of the Athens Urban Rail Transport (STASY), which operates the metro system, had filed a lawsuit against the strike when it was declared at noon on Tuesday for the next day, Wednesday

Mitsotakis declares ‘We are at war with Russia’, Turkey ‘no longer part of Western Alliance’

The Greek PM sharply criticised of Ankara’s stance in NATO and towards Greece, declaring that Turkey 'is not part of what we are accustomed to speaking of as the Western Alliance”.

Now, it is Greece’s turn to respond to Erdogan's defamation and inform the international community of what is really happening in the Aegean and the Evros Greek-Turkish border region.

Following the unsealing of the financial offers, HRADF’s board members announced the commencement of a process to seek improved bids by the three suitors