At the end of the ’60s, Mr. Vassilis got on his cart at Gerakini, Halkidiki, and after a day and a half of travel, he arrived at the dock where the Orient Express restaurant car was parked, in order to deliver his products, which will feed the train’s kitchen. It is one of the first years that the wagon-restaurant of the legendary train passes from Belgian into Greek hands and serves the Greek public on domestic routes such as Athens-Eidomeni, carrying its huge history and always having high standards in its cuisine with the choosing of raw materials being a “ritual”.

Overwhelmed and laden with his wares, Mr. Vassilis unloads the goods, with the chief chef’s assistants negotiating their price. He bargains and tries to sell his vegetables and fruits that are fresh and of finest quality at the best possible price . He knows that the cooks of the legendary wagon have the habit of choosing products from Greece full of aroma, taste, and color.

Manolis Stratos, chef and press officer of the Chefs’ Club of Thessaloniki, describes the scene from the 60’s, speaking to APE-MPE agency, as told to him by his great-grandfather Vassilis, a grocer of the time and jack-of-all-trades, who made a living taking trips that took days to deliver the products to the legendary train.

“As my great-grandfather used to tell me, in the kitchen of the wagon they preferred the products from Northern Greece and every time the train stopped here, they were supplied by him and a few more of the best producers of the time. The chefs tasted, smelled and chose. This made the difference in the well-known kitchen of the Orient Express, which bought very good raw materials at whatever stop the train made. Because the culinary culture in the Balkans was very developed, it found fresh and quality ingredients”, says Mr. Stratos.

Goat cheese from Halkidiki was on the tables decorated with linen tablecloths and fine porcelain, while the crystal glasses were filled with red wine from Northern Greece.

As the chef and press officer of the Chefs’ Club of Thessaloniki explains, the products at that time were simple, but their flavors were intense, because they had not undergone mutations and eugenics. As for the menu, this was customized according to the itinerary.

“Delicate flavors that had to be eaten that day. The chefs used the technique of brazing, ie roasting a pot with meat marinated in wine that simmered. Menu options were determined by destinations and routes. Depending on the landscape and the country that the legendary train crossed, the dish of the day was born. Crossing a mountain, chestnut with lamb and syrups were served. If again the traveler saw the sea during the trip, he ate sea bream and other fish with a lighter dessert, with vanilla aroma, explains Manolis Stratos.

Time, as always, was relentless for the Orient Express. The legendary train, Europe’s first intercontinental train that has been synonymous with luxurious travel since 1883 and for nearly a century, having traveled hundreds of thousands of kilometers, connecting dozens of European capitals along its 2740 km route, went off the map of SE Europe routes in 1977. It stopped uniting Central Europe with Constantinople and was left in time and on celluloid and the pages of Agatha Christie, of Graham Green, and the scenes from James Bond flicks. In the following years it was limited to the Paris-Vienna route. The train carriages got off the trains and the mobile restaurant full of stories, memories and recipes, ended up falling into a warehouse in Drama. Its current image, which is alive, as if not a single day has passed since its travels during the interwar period, bears no resemblance to the one seen in 2016 by the Members of the Educational Cultural and Sports Association (MEAS) “HEPHESTOS” of Railway Employees and Friends of the Drama Railway, where they found it among the wrecks, “dug it up”, gave it their attention and care and brought it back to life.

“This particular wagon was abandoned inside a depot with the windows open, or broken. Inside it was overrun by grass and had been turned into a pidgeon loft and shelter for various stray animals. We gave it the first aid, we cleaned it, we replaced the broken windows and we took it together with the locomotive to give it to the OSE museum in Thessaloniki,” says Mr. Makropoulos, President of the Educational and Cultural Sports Association (MEAS) “IFESTOS” of the Railway Employees and Friends of the Drama Railway.

After its transformation, the train looks so real that when you see its kitchen, you “smell” the smell of fresh bread. When you see its “machine”, the old utensils with the stove and the charcoal, you “smell” the well-cooked food and when you see the fold you can easily imagine the dishes that were served on it. There were no refrigerators, but you can see the old freezers and oak cans that kept the drinks at a good temperature. Everything was made with precision and detail.

Drama was a stopover, says Mr. Makropoulos and emphasizes that it was impossible for a locomotive that would start from Thessaloniki to reach Alexandroupolis. “It had to stop at Drama in order to be  replaced by another one which was loaded with coals and water, in order to be able to reach its destination”, he adds. The fact that the Railway Station of Drama was pivotal and important, is evident from its size, as Mr. Makropoulos points out and underlines that at that time it helped to transport the tobacco, which was in abundance in the area and which until then was transported by ships.

The big “lifting” by TRAINOSE technicians

The deep “lifting” of the wagon, however, took place in Thessaloniki. Within a few months, skilled craftsmen resurrected the iron hulk and delivered a visitable ornament that looks brand new today, like an image that has sprung from the time capsule of 1963.

“It has turned 95, but after the being at magic hands of the technicians, it looks like it’s living another youth again,” says Nikolas Lazou, president of the Northern Greece Railway Association, speaking to APE-MPE.

“With love, care and passion, we, the employees of the depot in Thessaloniki, managed to complete such a project, so that the restaurant is like new. Our craftsmen gave their best, while we are emotionally touched by the history of the Greek railway. We want its continuity to carry on to tomorrow, we do not forget yesterday “, he explains while he states that they will propose to make tourist itineraries as soon as the Thessaloniki International Fair is over, to put the restaurant car back on the rails.

It may not have diplomats, spies, revolutionaries, primates, kings and swindlers or millionaires, big game hunters and smugglers on its intercontinental passenger list today, but surely those who will be able to travel by the legendary train will “taste” the magic of another era.

The wagon is functional and can be used for itineraries. It was bought from Greece in 1962. It was used until 1998, while until 2007 it was used for tourism. The restaurant car, which was already placed in front of booth 15 and directly opposite the Fair’s Administration Building is available to the public during the 85th Thessaloniki International Fair, until Sunday 19 September.

While noting the need for Turkey to respect the sovereign rights of EU member-states Greece and Cyprus, the Commission’s report calls on Ankara to peacefully resolve disputes, and if necessary petition the International Court of Justice at The Hague.

Survey of CEOs in Greece – Economy improved from a year ago; risks from surging energy prices

Nevertheless, optimism appears guarded due to global trend of higher energy prices, which in turn may cause inflationary pressure, problems for certain sectors and negative impact for households

The trend is expected to intensify this year

The Market test for the Dioriga Gas begins

DIORIGA GAS A.E, a member of the Motor Oil Energy Group, is an Independent Natural Gas System infrastructure consisting of a floating terminal for the receipt, temporary storage and regasification of Liquefied Natural Gas

The Prime Minister Kyriakos Mitsotakis had a meeting with the President of the Arab Republic of Egypt, Abdel Fattah Al Sisi, at the Maximos Mansion, on the sidelines of the 9th Tripartite Summit of Greece – Cyprus – Egypt. During the meeting of the two leaders, the excellent level of bilateral relations was confirmed, while […]

While noting the need for Turkey to respect the sovereign rights of EU member-states Greece and Cyprus, the Commission’s report calls on Ankara to peacefully resolve disputes, and if necessary petition the International Court of Justice at The Hague.

Survey of CEOs in Greece – Economy improved from a year ago; risks from surging energy prices

Nevertheless, optimism appears guarded due to global trend of higher energy prices, which in turn may cause inflationary pressure, problems for certain sectors and negative impact for households

The figure brings the number of confirmed Covid-19 infections in the country, since the beginning of the pandemic, to 700,959

The trend is expected to intensify this year

The greater presence in the Greek market was announced during an event in Athens on Tuesday, where Discover the World also unveiled its new cooperation deal with Nordwind.

The final exit from the epidemic is now, and as autumn advances it is important to be vigilant and not to be lax with irresponsible behaviours on the individual and collective level, as this two year battle has been waged both by the state and citizens.

The Market test for the Dioriga Gas begins

DIORIGA GAS A.E, a member of the Motor Oil Energy Group, is an Independent Natural Gas System infrastructure consisting of a floating terminal for the receipt, temporary storage and regasification of Liquefied Natural Gas

“With the further capital increase, PPC is following an autonomous course,” said the president and CEO George Stassis

The General Index in balance exercises around 890 points 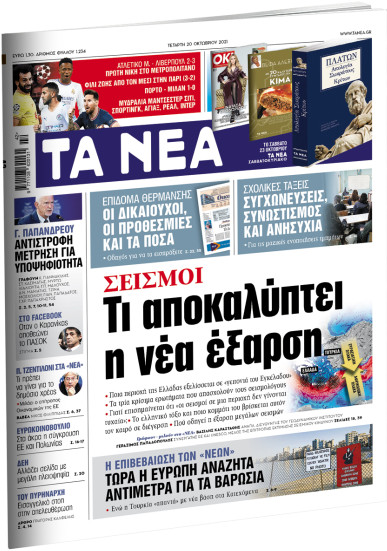