ingr > English edition > Hübel and UEFA did they see the referee’s crime in the match PAOK – AEK?

Hübel and UEFA did they see the referee’s crime in the match PAOK – AEK?

AEK was furious with referees’ decisions. They think that these decisions were significant for the outcome of the Toumba derby. Their first reaction talks about alteration of the final result

Finally. PAOK winner in a derby in Tumpa. And even this time without the need for a third half as in the draws with Aris and Panathinaikos. Just like in that 2-1 with Panionios. When the ultra-modern television broadcasting from the PAOK TV channel never showed Akrom’s aggressive foul before the winning goal.

So tonight. It was the television guys who found the job. And they were worthy of their wages. Basically the match was determined by their favour. Their choice in 57′ phase showed just a replay. The phase that was finished with a silly penalty of Simões penalty to Vieirinha for 1-0. A goal that would have never been scored if the referee had pointed out the obvious.

The clear offensive foul that preceded inside AEK’s part of the field  by Świderski  against Vranies. That’s where the phase was ended in the live-streaming. That’s where it should have ended with the use of VAR as well.  But the referees had a different view. And PAOK TV made sure to reinforce it since it never showed the shots that would help us all see the obvious.

“In the derby with AEK, the experience is enriched. The big game will be broadcast by 16 cameras, while for the first time ever a wire cam that will give a totally different view of the match from above will be used».  That’s what was advertised in PAOK TV’s press release. All the… goodies of the derby. In the end, though, 16 camers only found a single replay. What a mockery. Truly does anyone know UEFA’s guidelines for television broadcasting? How many replays does the international federation demand for a TV station to be able to present that handles such a broadcast?

El Arabi’s goal in the ‘’Olympiakos-AEK’’ derby was cancelled because an aggressive foul half a minute earlier in the middle of the field was discovered by VAR. How come nobody saw Świderski aggressive foul tonight? And how does PAOK TV justify this having to present in the future half of the… league during the play-offs? Who knows.

What’s more? Another day at work. Will Kakos, who saw Ba’s penalty against Macheda last Sunday, find it on Open TV when Mandalos hit the goal post with the ball? When Matos stepped on AEK’s captain. Because if the Macheda phase was a penalty, dear freelance TV-referee, then so was the Matos’ one. And of course the TV station will show the obvious hand of Varela in the phase against Branies?

But what does all of that mean if PAOK is to win its first derby? 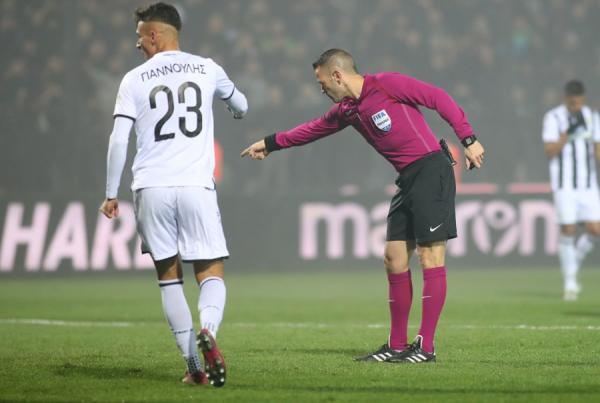 AEK is furious: »Pereira’s responsibility to alter the outcome»

AEK was furious with referees’ decisions. They think that these decisions were significant for the outcome of the Toumba derby. Their first reaction talks about alteration of the final result.

‘’We wonder how much worse it would have been today if there was a Greek referee.

We also wonder which criteria were used to select the referee team from Mr. Pereira, who is solely responsible for the alteration of the final result in today’s derby in Toumba. Maybe, instead of the referee abstention the proper scenario for greek football would be for Mr. Periera to be absent’’ says AEK.

Does UEFA and Hübel know that PAOK TV belongs to… DIMERA?

Just like PAOK’s stocks belong to DIMERA since 2012. Which is the team where the son of Bikas, archreferee and current observer, works.

But RFA is subsidiary company to DIMERA, that bought the sports facilities of Xanthi FC through the acquisition of VIALAND by Panopoulos and Syggelidis. The €10m investment of Ivan Savvides’ nephew’s waiter, John Kalpasidis.

The relationship between DIMERA and RFA has at least 140 financial transactions.

But RFA is owns Paralot. Another company of the family that is a well-known producer of OPEN TV and the sole owner of the sports site SDNA, owned by Ivan Savvides. 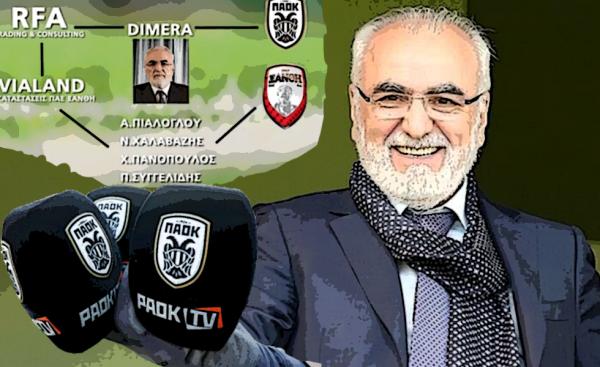 So, DIMERA is everywhere.

Moreover, the spouse of international referee Papapetros works for OPEN TV. Let’s not waste any more of this: it’s also part of DIMERA.

Can someone make a detailed table of contents? Honestly, can someone help us? For the good of our football. And the good of PAOK’s owner.

Because Ivan Savvidis will need this table of contents in the famous meeting of the Big 4 with the delegates of FIFA/UEFA that is expected to take place in the next days. This table of contents will make Savvidis’ life easier. You can’t just translate from Russian to Greek and then to English all these companies and their areas of operation.

A detailed table of contents where all of the aforementioned would lead to DIMERA would be a useful true for the meeting.

It’s a pity for Mr. Lakovic to go through all that trouble looking for how the companies are connected, their relationships and the trail of the money.

The powerful UEFA man who – among other things – will have to sit down at the same table with the rest of the owners of the big football clubs to try to find a solution.

And if he doesn’t find a solution? Then let him take a picture. To tell his grandchildren what he faced in Greece. The days of «Clear-out» where the caliphs have created the most filthy story.

While all these were happening under the supervision of UEFA. At the time of DIMERA.

Will the delegates find time to ask about PAOK TV and tonight’s altercation of the final result in Toumba with the … remote control in hand? Or there will be no time?