The revenues of the shipping company with gas transport ships, StealthGas, moved upwards in the second quarter of 2021 compared to the corresponding period last year. However, the increased operating costs of the ships, due to the expiration of bareboat charters, rising fuel prices and extraordinary charges, limited the profitability of Haris Vafeias’ company listed on Nasdaq.

Performance in the second quarter of this year was affected by two conflicting events, improved revenue combined with rising costs due to rising oil prices and rising costs to manage the effects of the Covid 19 pandemic, CEO of the company Haris Vafeias noted during a teleconference with analysts. Mr. Vafeias estimates that in the medium term the demand for LPG in Asia and Europe will increase.

“Although the COVID-19 pandemic persists, we have managed to reduce our exposure in real time compared to the first quarter of this year and most importantly, reduce our commercial recruitment. However, we still have high travel costs, also affected by rising oil prices. In addition, we faced high operating costs and dock costs due to the COVID-19 pandemic,” noted Mr Vafeias.

Operating costs increased as the bareboat charter for five ships of the company ended, after which they rejoined its fleet. It should be noted that of the 42 ships included in the StealthGas fleet, five are on bareboat, 32 are employed on time charters and five are employed on the spot market. As Mr. Vafeias pointed out, the fleet’s exposure to the spot market was reduced as nine new charters and charter extensions were successfully completed. Also in 16 ships their charters are completed by the end of 2021, something that would be an opportunity for recovery in case of market improvement.

Regarding gas demand, Mr. Vafeias referred to an analysis by Poten & Partners, which predicts an increase in gas demand in the coming years. Chinese imports will be driven mainly by the petrochemical sector, which is expected to lead to an 8% increase in LPG imports by the end of 2022 in Europe as well. However, the recent increase in COVID-19 cases due to the Delta variant may lead to a decrease in demand and consequently a fall in oil and gas prices.

In terms of fleet supply, 31% are over 20 years old, which is expected to strengthen the tendencies of dismantling an older fleet. The dismantling of six ships has been recorded since the beginning of the year. On the other hand there are 19 ships under construction which will be delivered by the end of 2023.

Finally, StealthGas announced that it has proceeded with the sale of two small LPG Carriers, as Mr. Vafeias clarified, both of these ships have a carrying capacity of 3,500 cubic meters, and any of their profits would be small, while he added that the newer ship will be delivered later. therefore it can be utilized in case the market improves towards the fourth quarter of the year.

Finally, answering a question regarding a possible merger with another company in the industry in order to acquire a larger size, Mr. Vafeias answered that he “does not know” and explained that if we see good value in such a move, it will certainly be taken into consideration by the board. Commenting on the recent mergers in the industry, he added that it takes two to three years for them to be properly assessed. In general, the bigger the better. StealthGas has a very large fleet on its own, he said, adding that “therefore, we do not have to merge to be large. It has to make sense in terms of numbers and in terms of value. “

The government was absolutely right in its decision to block the remanding in custody of teachers who abide by public health regulations – mandatory wearing of masks in schools and either vaccination of students or COVID-19 self-tests twice weekly.

Elton – Increased turnover and profits in the first half of 2021

Consolidated earnings before taxes, financial, investment results and total depreciation (EBITDA) reached 5.69 million euros, showing an increase of 22.43% compared to 4.65 million euros in the first half of 2020

Certification for the organic products of AmfilohiaGi

The certification concerns the production and marketing of Organic Products

Greece’s first participation in the ministerial conference on Libya

Diplomatic sources estimate that an important development that took place at the UN General Assembly is the fact that Germany accepted the participation of Greece as an observer country in the Ministerial Conference on Libya.

The government was absolutely right in its decision to block the remanding in custody of teachers who abide by public health regulations – mandatory wearing of masks in schools and either vaccination of students or COVID-19 self-tests twice weekly.

“Save the bees and farmers”

The effects of pesticides, which bees absorb through pollen and nectar, are catastrophic.

Elton – Increased turnover and profits in the first half of 2021

Consolidated earnings before taxes, financial, investment results and total depreciation (EBITDA) reached 5.69 million euros, showing an increase of 22.43% compared to 4.65 million euros in the first half of 2020

The Work Permit procedure has been implemented which enables authorized personnel to perform any activity digitally, the company announced

Certification for the organic products of AmfilohiaGi

The certification concerns the production and marketing of Organic Products

The group’s goal is to evolve into a provider of low carbon footprint energy solutions, reduce CO2 emissions by 50% by 2030 and achieve carbon neutrality by 2050

The Ministries of Finance and Shipping pointed out that uncertainties are removed from the existing contractual relationship for the benefit of the Greek State, among other things. 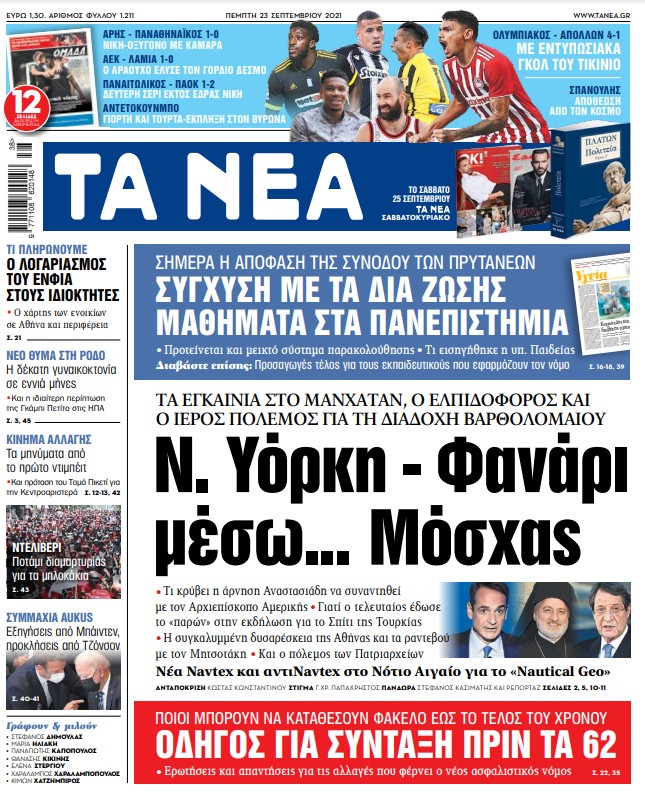 Green Is The New Red