Great leaders often include a personal mea culpa in their political life, but the issue is what lessons are gleaned by such self-criticism and admissions and how people interpret them.

Angela Merkel is stepping down as German Chancellor. As we know, she said that the most difficult moment in her 16-year tenure Greece’s economic crisis was when she demanded too much from the Greek people.

Hence, the economic prescription was harsh or even wrong, as market players and the IMF have admitted in the past.

Yet this is not the real issue, as the bailout packages were intended to save Greece, and maintain its organic relationship with the EU, the Eurozone, and the European acquis.

Once again, the main issue as regards the outgoing Chancellor’s statement is Greece’s stance – how we reached over the years the point of being governed by imposed economic prescriptions and measures, often due to our own imprudent policies.

We destroyed our fiscal situation by choosing a skewed model of consumption and a dysfunctional structuring of the productive base.

Hence, Merkel’s statement should lead us collectively to a rethinking of what happened and not reflexive indignation, which often leads to extremes.

This is yet another opportunity to do so.

OECD – Assessment of Greece for bribery of public officials

Shiamishis – “We will have high energy prices during the green transition”

Greece-France agreement – What it signals – The mutual defense assistance clause

In this way, Greece is shielded against threats, especially in the Eastern Mediterranean.

Editorial Ta Nea: Everything must come to light

There are images that can never be forgotten. One of them is the image of mothers holding in their hands and showing pictures of their sons, standing and crying in front of the roadblocks that separate the occupied north and free Cyprus, waiting to hear news about their missing sons.

Turkey has not abandoned its rhetoric regarding the so-called “Blue Homeland” [which poses a direct threat to Greek sovereign rights], and Greece cannot remain indifferent to Ankara’s effort to become a basic pole in the broader region.

OECD – Assessment of Greece for bribery of public officials

Shiamishis – “We will have high energy prices during the green transition”

The two leaders presented the agreements as a substantial step toward the much touted EU defence autonomy and ended a joint press conference at Elysee Palace with beaming smiles and raised clasped hands, signalling the importance of the deals for both sides.

Greece-France agreement – What it signals – The mutual defense assistance clause

In this way, Greece is shielded against threats, especially in the Eastern Mediterranean.

Macron – The friendship between Greece and France is strong and continues

“We would say that the history of Greece – France is a history of love and freedom between two countries,” Macron told TA NEA newspaper

“I have no desire to engage in an arms race with Turkey. This is not my intention. There are, however, crucial issues regarding the modernisation of the armed forces, following the decade-long [economic] crisis, which I have the responsibility to handle and hand over to my successor,' the PM said. 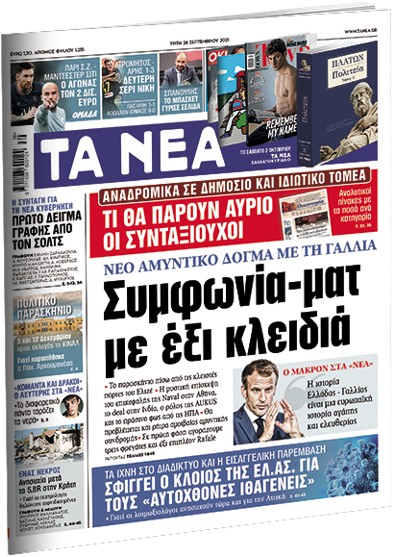