According to the report, Tziva and the Kammenos couple enjoyed their trip to Monaco together

Questions that will stir a new political maelstrom have been raised by the recent trip of Defence Minister Panos Kammenos and his entourage to jet set Monaco.

The questions touch on the core of ongoing political confrontations. The main opposition party reacted strongly, demanding explanations from the political leadership of the justice ministry and from top judicial functionaries, regarding the presence of the head of the Piraeus Prosecutor’s Office, Eirini Tziva, in the same place and at the same time as Panos Kammenos

According to a report in the newspaper Parapolitika, Kammenos and his wife, over the three-day Holy Spirit holiday weekend, traveled to Monaco, at the same time that Prosecutor Tziva was there.

It should be noted that Eirini Tziva’s name popped up in the conversations of Makis Giannousakis – who is serving a life-term over the Noor 1 affair – with Port Authority officer Panagiotis Christoforidis, when the latter maintained that Tziva stayed on in Piraeus in order to finish the case (prosecution of shipowner Vangelis Marinakis). He said that this way “New Democracy is finished and SYRIZA stays on for a decade”.

According to the report, Tziva and the Kammenos couple enjoyed their trip to Monaco together, and more specifically at Monaco’s luxurious Yachting Club. At the airport in Nice, the entourage looked comfortable, according to eyewitnesses cited by the newspaper.

Indisputably, Eirini Tziva was in France on Saturday, 26 May, the same day Kammenos went to Monaco, as is shown by the invitation of Prince Albert, which the defence minister himself publicised.

The report raises reasonable questions, such as how does one handle the moral issues that arise from the Tziva-Kammenos meeting, since the defence minister played a leading role in a series of coincidences related to the preliminary criminal investigation in the Noor 1 case.

Moreover, how coincidental is the fact that both arrived in Monaco on the same day, Tziva via Marseille and Kammenos from an unknown starting point, and that then both left on the same flight to Athens?

Based on these revelations, New Democracy is asking the justice minister to answer a series of questions: “Is it true that the head of the Piraeus Lower Court Prosecutor’s Office, Eirini Tziva, who is known throughout Greece due the Giannousakis affair, in which Defence Minister Panos Kammenos played a leading role, was together with Mr. Kammenos in the broader region of Monaco on the weekend of the Grand Prix?”

“If so, what business does a prosecutor have accompanying Mr. Kammenos, while she is handling judicial cases, the outcome of which Mr. Kammenos has taken for granted in advance?” New Democracy asked.

“Where did the said prosecutor reside, and how much did her strip and stay cost, when it is known that Monaco and the broader area are among the most expensive in Europe, especially during the period of the Grand Prix? Is it true that the prosecutor, as the report states, has taken a series of recreational trips abroad, one with the other protagonist in the Giannousakis affair, Coast Guard officer Christoforidis? If so, how does the said prosecutor manage to fund such expensive trips, when her salary cannot justify them? What do the Supreme Court Prosecutor and the Justice Minister intend to do in order to ascertain the relationship between Kammenos and Tziva, as well as the manner of funding of her trips?”

*Similar questions are raised by To Potami MP Mavrotas, who quipped in speaking to Ta Nea: “When the speed in delivering judicial opinions is a problem, I am not surprised by the on-site presence at the Grand Prix in Monaco. It may perhaps be a useful experience and a source of inspiration for judicial functionaries.” 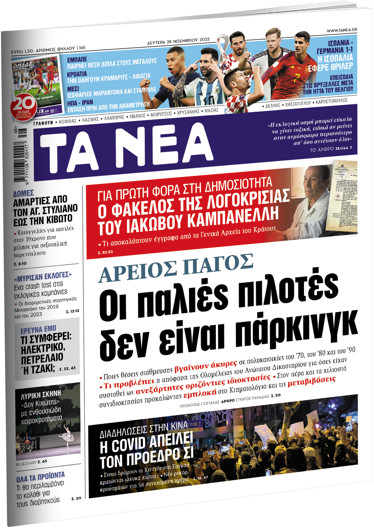