A unique shipbuilding cluster in Europe that seems ready to enter a new development period, as for the first time in decades new fresh capital is ready to be placed in the two largest shipyards in the country, creating better conditions for the area in Perama.

The role of the “Chinese dragon”

In any case, the shipbuilding industry in our country seems to be coming out of the “coma” and entering a period of recovery, as the president of EVEP Vassilis Korkidis states in “Vima” expressing the optimistic view that something better will come in the long-suffering region. of Perama, in view of the expanded needs for the conversion and construction of new more “green” ships, especially in coastal shipping.

According to the Maritime Chamber of Greece (NEE), the recovery of the sector is due to five reasons:

1. Mobility in the operation of large shipyards.
2. In launching the simplification of procedures and the gradual elimination of malfunctions.
3. In the maintenance of the know-how possessed by the Greek technicians, undertaking repair and maintenance works on ships located in foreign ports.
4. In start-up companies of shipping equipment, such as automation, software, telecommunications, cable connection, innovative lighting systems, etc.
5. In the appeal of the Greek shipping businessmen to strengthen the Greek production and economy.

In the last five years, in the 24 Private Shipyards of Perama, according to Mr. Theologos Katsoulakis, president of the Association of Owners of Shipyards of Perama, 83 new constructions of ships with a total capacity of over 165,000 have been implemented, while hoists, maintenance or repairs have been carried out in 8.3.

It is noted that the shipyards have completed 100 years of continuous operation. They started from small yards building wood vessels and over the years have evolved into modern shipyards and autonomous technical and economic units, perfectly sound, legally licensed under industrial, environmental and firefighting legislation, Mr. Katsoulakis points out.

The annual turnover of the shipyards and the satellite companies employed in them amounts to several hundred million euros of which 80% of the turnover comes in foreign exchange.

Their high know-how and modern infrastructure attract a large number of ships from abroad and it is noteworthy that they do not owe to the public coffers, but also managed to modernize themselveswith equity and become one of the most important attractions of international shipping. 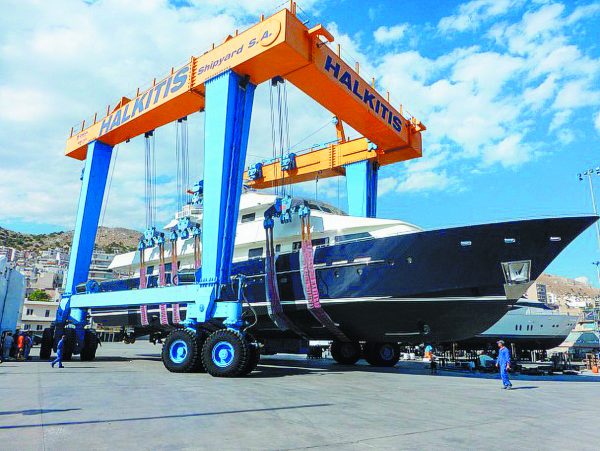 As Mr. Katsoulakis emphasizes, the shipyards have a future and will have even more with the positive development of the reopening, as it seems, of the two large shipyards, Skaramagas and Elefsina. We believe, he notes, that it will be a positive development for the growth of the repair industry in our country as it will be able to serve large ships. The operation of the two large shipyards is not competitive with the Shipyards of Perama, both due to the size of the ships, but also due to the special know-how possessed by the Shipyards of Perama, especially for ships up to 120 meters.

In the same vein, Vassilios Kanakakis, president of the Shipbuilding Industry Association (SENAVI), notes that now that the two large shipyards Skaramagas and Elefsina are open, the need for repairs in Perama will increase greatly, as there will be several synergies .

Many of our colleagues are already going and working in the shipyards of Syros, he added.

However, the Shipyards of Perama were developed without the care and concern of the state, says Mr. Katsoulakis, and adds that they are finally asking for capital and guarantee aid, as well as tax relief, similar to our European competitors, such as Malta, Croatia, and Cyprus.

Cosco’s relations with the shipyards

The shipbuilding industry’s relationship with Cosco, which controls PPA and manages NEZ, is a special chapter. The Chinese demand for a shipyard, which was not part of the concession contract, provoked strong reactions from shipbuilders. In fact, as Mr. Kanakakis reports, the Chinese have abandoned the zone to its fate, resulting in serious problems in its operation. They delay projects, close piers, with the result that they have nowhere to moor ships for repair, etc.

Whereas in the past there were 100 places available to moor ships for repair, now there are only twelve left.

For his part, Mr. Katsoulakis points out that the shipyards’ relations with Cosco are not “hostile, but neither are they harmonious.” The issue of “arbitrary” and “excessive”, as he characterizes them, charges from the PPA / COSCO to the ships is a point of friction and has a negative effect on the competitiveness of Perama Shipyards. 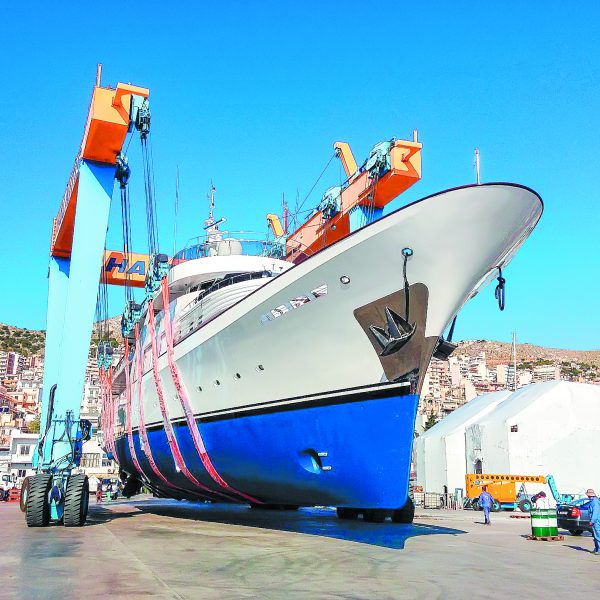 The plans for Skaramagas and Elefsina

The developments in the two large shipyards Skaramaga and Elefsina are at a key point. For its part, ONEX, which already operates the shipyards of Syros with 650 employees, and is also bidding for Elefsina, states that investments have been made in Syros of around 30 million euros that have put the shipyard into full operation, resulting in repairs carried out on about 100 ships a year, of all categories and sizes up to panamax. Future plans for the Syros shipyard include the addition of another tank to increase capacity and the full operation of the synchrolift, where it will focus on both new construction and maintenance of yachts and coast guard and naval vessels, since Neorio is in the center of the Aegean.

In Elefsina, the plans are for a plan in which borrowing and investment will reach half a billion euros. Two organizations will be developed, one commercial and one for defense. The merchant branch will repair ships up to Suez, aframax and suezmax and the number will be 150-180 ships per year.

At the same time, work will be done that will concern both the “green” transition of ships and repairs that are directly related to environmental issues. In addition, it will focus on repairs, renovations and offshore equipment related to green technologies, such as wind turbines, etc., while a center for innovation and new technologies and new materials will be developed, in collaboration with relevant domestic academic institutions and in collaboration with startups etc.

The defense organization will focus on the construction of new warships of all categories, where the cooperation / partnership with the Italian group Fincantieri enables the shipyard to meet any needs of the Navy and to focus on the market of the Southeast Mediterranean.

In addition, modifications and upgrades related to defense equipment will be possible. Regarding the jobs in the Elefsina shipyard, both in the commercial and in the defense part of the organization, it is estimated that they will exceed 2,500-3,000 in 3-5 years.

In Skaramagas, the completion of the process of transferring the unit to the bidder, the Greek shipowner George Prokopiou, is still pending. The award of Mr. Prokopios as the highest bidder has been issued, however the transfer process cannot proceed as there is a legal impediment. Prior to the transfer, a decision must be issued on the request for suspension of the procedure submitted to the CoC by the mayor of Haidari, a decision that is expected to be issued in the coming days, while on January 18 the Council of State’s request for cancellation of the tender is discussed. The two pending legal issues must be closed before the transfer of the yards can proceed.

Agreements with the Navy

However, according to the information, Mr. Prokopiou’s plans are to proceed with the agreements with the Navy, while the shipyard will also deal with the construction of luxury yachts, in addition to the repair of ships. It should be noted that the Prokopiou group controls Olympic Marine in Lavrio, which is the only marina in Attica that offers comprehensive maintenance, repair and upgrade services for your boat.

With a permanent staff of 30 skilled workers of various specialties, a number of specialized external partners and an award-winning team of shipbuilders and engineers, Olympic Marine can undertake and carry out all the work that a boat owner may need, from minor repairs to complete repairs, or modification of the vessel.

New investment of 7.5 million euros in a new yard

A new investment of 7.5 million euros, construction of a new shipyard, GOLDENYACHTS SHIPYARD in the area of ​​Perama, is proceeded by GOLDENYACHTS, of the Dragnis Group, which has already invested since 2009 in the Halkiti Shipyard.

The new unit will be located at 122 Dimokratias Avenue at Peratos Street, and will be able to build and repair yachts, up to 120 meters long. The installation / creation of a new pier is foreseen as well as the supply of new and modern mechanical equipment with the aim of repairing and maintaining yachts.

The yacht repair and maintenance industry is inextricably linked to maritime tourism and in particular to the available Greek yacht fleet that falls into the yachting category.

According to the data of ICOMIA (International Council of Marine Industry Associations) there are 170,052 yachts in Greece, of which 125,137 belong to the category of plastic boats, including boats with outboard engine, ie 74%. The second largest category is the one of inflatable boats which amount to 21,400, representing 13% of Greek boats. In terms of economic prospects, the most important position is occupied by the sailing boats which amount to 4,060 and the 13,445 motor boats with internal engine, ie a total of 17,505 pleasure boats.

There are currently 672 intubated COVID-19 patients with median age of 65-years-old (59.5 percent men), and 79 percent have an underlying medical condition and/or are age 70 or older.

The prospect of a higher electoral percentage has made many consider a return to their Social Democratic political home, and many voters who over the last years disappointedly chose not to vote are looking for a party that can express them.

Editorial To Vima: The burden of inflation

In our country, what is exceptionally problematical is the explosive rise in the price of natural gas (135 percent), electricity (45 percent), and heating fuel. They comprise an extremely sensitive whole that can trigger a new inflationary cycle.

Growth is important for fiscal credibility, which is a central goal of the government in the country’s effort to gain investment grade.

The automobile technologies that Greeks preferred in 2021

The Association of Imported Car Dealers finds a big increase in LPG cars and a very big drop in the sales of diesel cars.

Development Laws – The missed opportunities from 1998 until today

46.5% of the number of projects and 72.2% of the total budget concerned RES (especially photovoltaics) and tourism and another significant percentage of business warehouses

There are currently 672 intubated COVID-19 patients with median age of 65-years-old (59.5 percent men), and 79 percent have an underlying medical condition and/or are age 70 or older.

The prospect of a higher electoral percentage has made many consider a return to their Social Democratic political home, and many voters who over the last years disappointedly chose not to vote are looking for a party that can express them.

“Showroom” with counterfeit products taken down

A ground floor exhibition of imitation clothing, footwear and accessories of large and well-known fashion houses was located in Artemida, Attica.

Editorial To Vima: The burden of inflation

In our country, what is exceptionally problematical is the explosive rise in the price of natural gas (135 percent), electricity (45 percent), and heating fuel. They comprise an extremely sensitive whole that can trigger a new inflationary cycle.

Greece is above the average in Europe

Growth is important for fiscal credibility, which is a central goal of the government in the country’s effort to gain investment grade.

The planning concerns 2023, as a government official stated today

The automobile technologies that Greeks preferred in 2021

The Association of Imported Car Dealers finds a big increase in LPG cars and a very big drop in the sales of diesel cars.

The total investment at 35 million euros, which will be financed by the raised funds of the green bond issued by PRODEA in July 2021

SZ – “The savior of Thessaloniki” 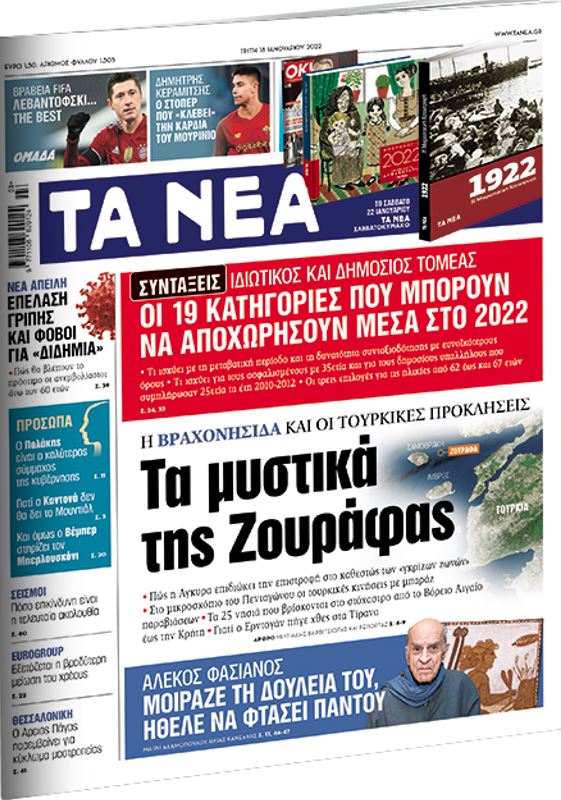