In a move that would reverse a policy of decades, Minister of Education, Research and Religious Affairs Kostas Gavroglu came out in favor of the Muslim minority in Thrace electing their muftis, professional jurists who interpret Islamic law and rule on family law issues.

The remarks came straight on the heels of Turkish President Recep Tayyip Erdogan’s calls for a revision of the Lausanne Treaty and his attack on the Greek state for mot allowing the popular election of muftis, which is banned even in Turkey.

The timing of his statement could create the impression in Turkey and at home that the government is caving in to the demands of Erdogan as a concession.

But it also comes after Prime Minister Alexis Tsipras announced legislation that will abolish the existing mandatory application of the sharia, the corpus of Islamic law, among the members of the Muslim community in Thrace.

Popular election of a mufti with emasculated powers is certainly a different matter than electing one with mandatory judicial powers over all citizens born to the Muslim faith.

“A very serious discussion should begin with the minority itself, regarding the rationalisation of the procedures for selecting muftis,” Gavroglu said.

“The serious issue which we must grapple with is defining the electoral body. The [Ecumenical] Patriarch is not elected by the Greeks of Istanbul, nor by priests, but by the members of the Holy Synod [of bishops. Hence, in the election of religious leaders, there is always a special electoral body,” he said.

Following the passing of the law that will make implementation of Sharia law optional, Gavroglu said the government will seek the issuance of a Presidential Decree that will specifically define the jurisprudential authority of the muftis.

That will be followed by the appointment of a committee comprised of legal scholars and experts on Islamic law, to hammer out the details.

Ms. Zacharaki also described what she experienced when she contracted the coronavirus

The plans of the big Greek groups for RES, natural gas and hydrogen – The deals with foreign players

Authorities estimate that they are on the trail of an international counterfeit goods ring, which make significant profits, deceiving consumers

Ms. Zacharaki also described what she experienced when she contracted the coronavirus

Three new ships in the fleet of Navios Partners

Navios Partners also received the Navios Star (2021) a kamsarmax 82,037 dwt, which was chartered in the same way as the Navios Amitie until June 2024.

The plans of the big Greek groups for RES, natural gas and hydrogen – The deals with foreign players

The British website in an extensive article praises the Cycladic island, and Reader’s Digest follows suit.

Authorities estimate that they are on the trail of an international counterfeit goods ring, which make significant profits, deceiving consumers 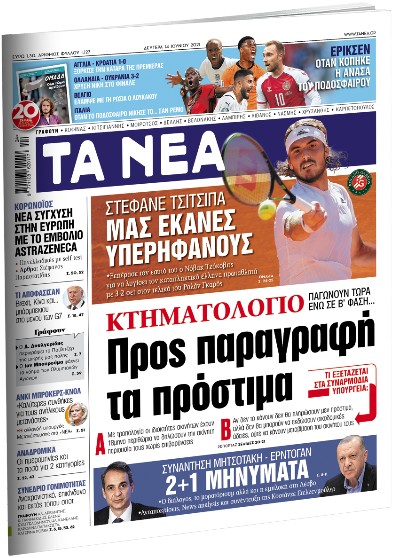