In Athens for a meeting of the Central Union of the Municipalities, Mayors of Eastern Aegean islands rejected the PM's plan and said that they do not have the capacity to deal with so many people in areas such as health care.. The Mayors of the municipalities of the islands of Chios, Samos, Lesvos, Leros, and Kos, are complaining that their islands have borne the brunt of the migrant and refugee crisis, with hundreds now arriving daily. are expressing the opposition of their citizens as until now there has not been a fair distribution of migrants around the country. Theiy oppose the constructiont of migrant camps.

The revelation that a hotel invoice for the stay in Athens of individuals charged with participation in a criminal blackmailing ring was initially issued in the name of PAOK FC, and then reissued in the name of Ivan Savvidis’ Dimera Company, has once again brought to light a case that had long been concealed

Kammenos declares abiding loyalty to ruling coalition, ‘to the end’

Aegean migrant tragedy as 16 die when boat capsizes near Agathonisi

Eight Turkish officers will not be extradited, Greek judges decide

Ivan Savvidis’ businesses and the flight to Rostov

Dimitris Avramopoulos, Commissioner for Migration, in explaining the disbursal, underlined that the huge aid package is not going directly into Turkish state coffers, but rather into a special refugee fund.

Is Greece Ready to Stand on Its Own Feet?

Later this summer, a major event in Europe’s evolution will take place: Greece, the major culprit
of Europe’s past fiscal and economic irresponsibility, is due to exit formally the last of its bailout
programs. Just as the eurozone crisis began in Greece eight years ago, so too will it formally end
here.

Mitsotakis: Tsipras tried to do favours for Savvidis

The dismal events that took place in Thessaloniki’s Toumba Stadium on Sunday, with a gun-toting Ivan Savvidis invading the field of play, shocked not only our country, but the entire world.

New fines, penalties for civil servants smoking on the job

Ivan is no longer great

The image of Ivan Savvidis, a Greek-Russian entrepreneur and owner of PAOK, one of the biggest football clubs in Greece, storming into the football field and threatening the referee, with his sidearm clearly visible in its holster, was not just a reminder of the endemic corruption of Greek football. It also made evident that the quest by the SYRIZA-ANEL government for friendly oligarchs ended up as a tragedy.

The biggest scandal in Greek Football

Not even with a gun against a head. You can not believe what happened in Tumba Stadium. Kominis counted Varela's goal in the changing rooms (!!!) by writing on the score sheet that the score was 1-0 until the match was brought to a permanent stoppage. PAOK argues that AEK is responsible for the interruption, and AEK argues that Savvidis violent invasion on the pitch.

Shocking: Ivan Savvidis with his hand at his gun in the field!

It seems like a joke, but is real: Ivan Savvidis was not only carrying a gun when he stormed in the field of Toumba Stadium, but had also his hand at it when he was moving towards referee Kominis!

In Edirne, there is radio silence about the two Greek army officers

The return of Melissanidis and the problem of Aegean Marine Petroleum

Yildirim: Greek officers’ case judicial matter, Ankara may respond to US off Cyprus

American Sixth Fleet in Cyprus’ EEZ, ahead of ExxonMobil drilling

Hellenic Petroleum collaboration with Repsol in Ionian, south of Crete

Full speed ahead on auctions of seized properties

In a hard-line shift, Zaev suggests only the name issue is on the table

Touloupaki under fire from politicians, judges over handling of Novartis case

The slow wheels of the Greek justice system

Moscovici says no new bailout memorandums will be needed

Government lashes out at Mikis Theodorakis with a vengeance

Kammenos pledges allegiance to Tsipras, digs in heels on FYROM 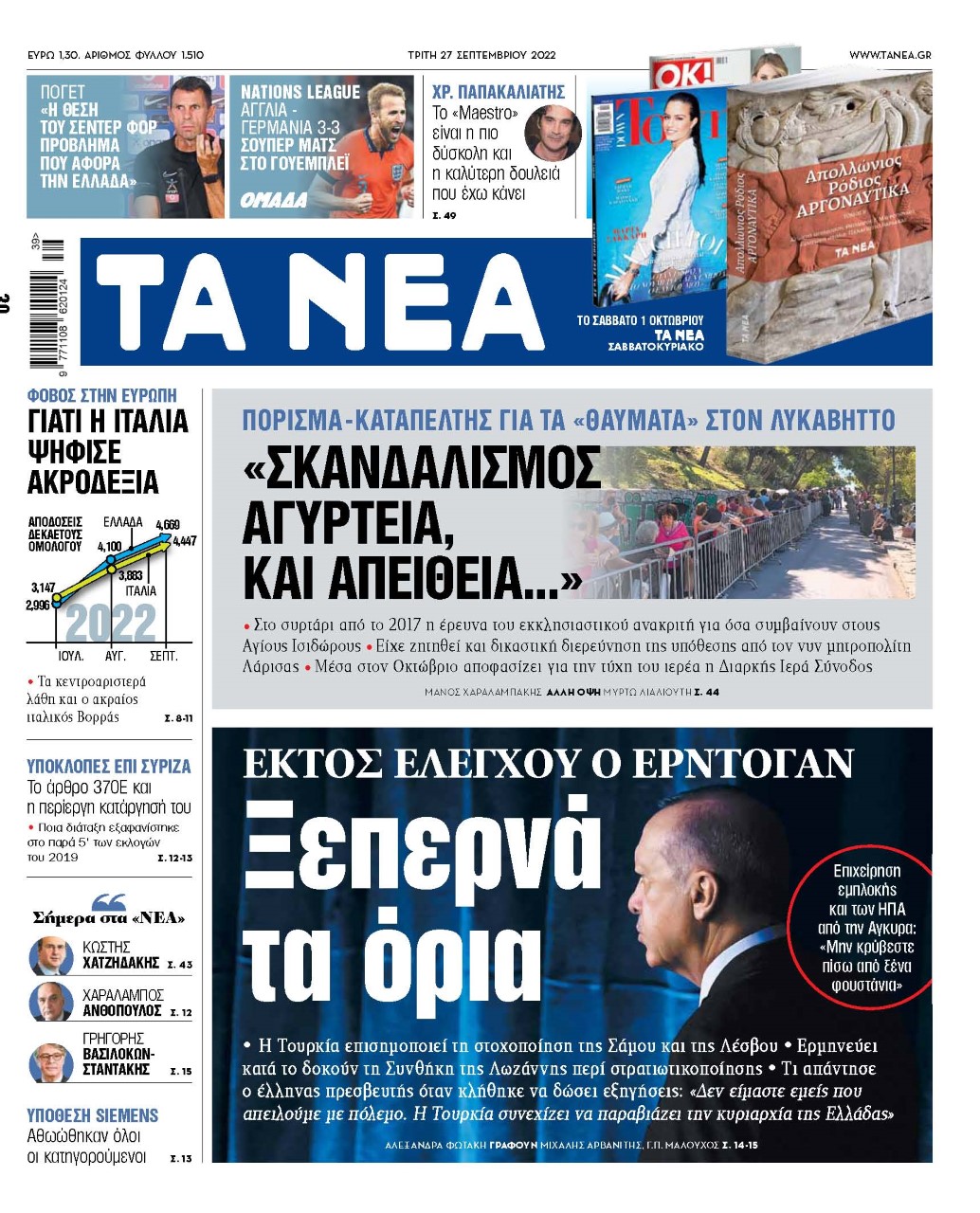