JP Morgan expects a new Greek entry into the markets in the coming weeks, either through the issuance of a new reference bond (5-7 years) or through the opening of bid books for existing securities (10 years), proposing a partial profit in view of the new offer of securities. In the medium term, the prospects of Greek bonds are considered a positive consequence of the favorable relationship between the dynamics of securities supply in relation to the bond markets by the ECB, the macroeconomic outlook of the country, and the stable political environment.

It should be noted that the intention of the PDMA, which has already raised 8.8 billion from the markets this year, is to enter the markets in the next period anyway, while in any event it has organized its strategy based on the economic situation that will be formed.

If, for example, things are going badly this year, emphasis should be placed on debt management, but if they are going relatively well or even better, raising more money from the markets (from 12-14 billion. euros calculated for 2021) to be used later when interest rates will rise and economies will recover for faster debt reduction, should be pursued now that interest rates are low. For example interest rate issues of € 12.8 billion could soon be cut in half, improving debt sustainability.

However, if things follow the expected normal development, if for example an average of 40% -50% of the population in the EU has been vaccinated by the end of June, as estimated by the European Commission, then the recovery of tourism and the economy in the second half will lead the GDP to growth of 3.5% -5% this year, while the Greek economy in 2022 – as a result of the resources of the Recovery Fund, but also of the 30 billion additional deposits, part of which will go into consumption – could be rebound at unprecedented rates.

Greece is now considered a «normal» debt issuer with bonds in all maturities, while the recent issue of 30-year bonds completed the yield curve in all maturities for Greek securities. However, although the rating agencies consider the Greek debt viable at this stage, they are not expected (despite the upcoming upgrades) to give us the famous «investment grade» notch at least for the next 1.5-2 years, as they want a final consolidation, the restoration of the level of red loans to reasonable levels, as well as the full implementation of the new bankruptcy law, in order to clear the balance sheets, but also to deal with «zombie» companies and trapped assets that are interrelated problems, which affect the Greek economy.

However, Fitch estimated that the Greek debt is sustainable, despite the fact that it has increased significantly due to the coronavirus pandemic and will remain at very high levels for a long time. The public debt amounted to 207% of GDP at the end of 2020 from 181% in 2019 due to the great shock caused in public finances by the coronavirus and will remain at these levels before falling to 193% of GDP by 2022, Fitch said. However, there are several countervailing factors that make Greek debt sustainable, such as its low service costs, while the country’s financial needs are expected to remain below 15% of GDP for a decade, after peaking in 2022-2023.

Podemos as a political product has an expiration date and has failed to take root as a pole of democracy and progressivism, despite its participation in Spain’s coalition government.

BoG: The interest rate on deposits remained unchanged, that of loans increased

What the Bank of Greece announced

Rising fares have brought Safe Bulkers back to profit

'The Administration believes strongly in intellectual property protections, but in service of ending this pandemic, supports the waiver of those protections for COVID-19 vaccines,' US trade rep Katherine Tai said in a statement.

Podemos as a political product has an expiration date and has failed to take root as a pole of democracy and progressivism, despite its participation in Spain’s coalition government.

The Greek family: The changes in the average model and the importance of social and economic reforms

BoG: The interest rate on deposits remained unchanged, that of loans increased

What the Bank of Greece announced

Handelsblatt: “Vote of confidence” for Greece through bonds, the Tsipras-Varoufakis era is in the past

The German financial newspaper singles out three reasons for the successful issuance of the five-year bonds in its online edition, emphasizing that the government no longer has a problem with borrowing.

Rising fares have brought Safe Bulkers back to profit

Theodoros Skylakakis stressed that the scenarios of the Finance Ministry show average growth in the next 4 years on the order of 4% with much better data in 2022.

'The Administration believes strongly in intellectual property protections, but in service of ending this pandemic, supports the waiver of those protections for COVID-19 vaccines,' US trade rep Katherine Tai said in a statement.

As we begin to gradually take our lives back from now on, the behaviour of each of us individually will demonstrate how we view the concept of collective responsibility.

Greece ranks 26th out of 30 European countries in terms of the percentage of the population vaccinated with at least one dose (24.4 percent) according to ECDC data released on 5 May and published today by in.gr. 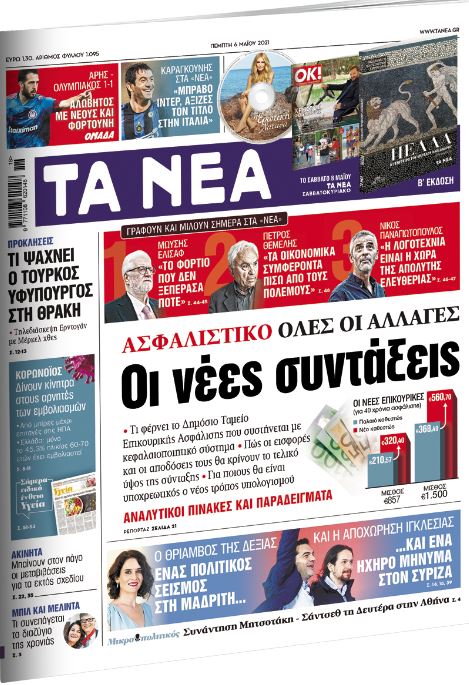