“After the end of the match I asked the police chief, Mr. Alexandropoulos, and he told me that certain police officers saw AEK FC owner Mr. [Dimitris] Melissanidis slapping Aris FC President Mr. [Thodoros] Karypidis in the face and that the incident will be reported to their bureau.”

“During the departure of the referees for the locker rooms at half-time between two and four home team fans without accreditation and with no right to enter the locker room area attempted to attack the referees with shouts of “Why penalty?”, “No penalty!”, and “F@ck you all!”. One of them, as the referees told me as I was a few metres behind, approached the first assistant referee who was a bit ahead and grabbed and pressured his genitals saying, “I’m the boss!”

The above are two different excerpts of the report of Symeon Tsolakidis, an observer at the AEK-ARIS match, which was the first cup semi-final at the Olympic Stadium in February.

This outlandish story became more widely known in Europe as the team of referees was from Portugal.

Referee Artur Soares Dias in an interview with Portuguese SIC television left little room for doubt. “To have someone from a club grab the assistant referee by the genitals is shameful. I did not want to believe what happened. Sometimes I feel powerless.”

“Tell us Mr. Bakas, who is responsible for your being beaten?”

“What I know Mr. Bakas is that you appear on television with red pants which you display to all of Greece as if you were Brigitte Bardot.”

That is an excerpt from a SKAI television newscast anchored by Nikos Evangelatos who interviews Dimitris Melissanidis and referee Filippos Bakas – who after the Panathinaikos-AEK cup final in April, 1995, ended up in hospital after being ambushed and beaten by eight individuals.

The years go by and certain things remain unchanged including behaviours that exceed all limits – phenomena that are above the law and rules and beyond logic.

In the interim we had the case of Christophoros Zografos, the deputy chief referee in 2014 who ended up in hospital that November.

“Mafia attack” the press reported after two “gorillas” in Kolonos threw him to the ground and beat him on the head with cudgels.

“He received three threatening phone calls from a person who identified himself as Dimitris Melissanidis,” the press reported in…fine print.

The observer of the referees, Dimitris Kyrkos, said, “In the 30th minute of the game Mr. Dimitris Melissanidis approached him in a threatening manner and declared “What are you doing here again you bollock? You’re up the same games again you pitiful thing? I’ll crush you. I’ll choke you with the scarf. I’ll screw you and I screw your gang”.

After half-time Melissanidis approached him again and threatened him: “I’ll blow you up. I know where you live and what you do. You are a member of the gang.”  That is how referee Kalogeropoulos in February, 2016, recorded the statement in his report on the AEK-Olympiacos match.

How can such things be going on for a quarter-century?

That is a question for the Greek judiciary and for the state, which has failed to create a real “protective framework” for football.

In fact, the problem has been festering not for 25 but for 40 years according to a Wikipedia entry.

How can such things happen? Fear shuts mouths. In most such cases small fines are imposed or the statute of limitations has run out by the time cases are examined.

The victims are more terrified by what comes afterwards. They are dragged through the mud by an army of media that in the name of OPAP betting company advertising are prepared to engage in character assassination.

It is a machine that indiscriminately makes minced meat out of people and has no compunction about doing so in the presence of institutional players.

Just last Saturday, the newspaper Live Sport carried a front-page story stating that “AEK considers the deputy minister to be the ‘Filipina [household help] of Olympiacos’ and that Dimitris Melissanidis will send Minister Lefteris Avgenakis a servant’s apron!

This is an athletic newspaper which is rumoured to be staying afloat by not paying staff for months from the ad revenues from OPAP, in which Dimitris Melissanidis is a minor shareholder but also the biggest Greek shareholder.

The same newspaper revisited the issue in a Monday front-page story: “Their friend little Lefteris: How Avgenakis once again united AEK, Panathinaikos, and PAOK and turned FIFA and UEFA against him”.

It was the fourth front-page story in the month of May about the deputy minister for athletics. It was preceded by a piece entitled “Lefteris are you not at all ashamed?” on 8 May, and another entitled “The first nail after the about-face”, on 13 May.

One sees the outrageous tenour of the reporting about a government official.

Dimitris Melissanidis began his association with OPAP in 2013. His team, AEK FC, although it vetoed any measure bringing a semblance of competition, received a 2.1` million euro package from the erstwhile state enterprise.

At the same time all football clubs got smaller packages as did the country’s athletics news outlets. The “conflict of interest” was off the radar for years on account of the fact that the “Tiger” [Melissanidis] was not a shareholder in AEK FC.

Dimitris Melissanidis, who until then was a simple, pure AEK fan and nothing more because there was a conflict of interest in being an OPAP shareholder, could now present himself anyway he liked and he would have no problem if fans called out “Hey big President”.

The two ministers of the former government played a decisive role in the way SYRIZA intervened in football’s self-governance. It toppled a legally elected Greek Football Federation (EPO) management, opening the way for the current management – the much-touted “Cleanup” crowd which today is accusing New Democracy over its cooperation with UEFA and FIFA and over the “Memorandum” that will establish a number of major changes to the existing athletics law.

Will the “Tiger” be allowed once again to hand out aprons or will they send him a bib to wear, because the years have gone by…and he may need it.

'Both sides expect a Washington visit to happen, and I think it will largely be determined on how things proceed in terms of finally defeating the pandemic and getting us back to the normal business of face to face diplomacy.'

Greek foreign ministry calls for restraint by all sides in Jerusalem

Greece is gradually and carefully returning to normalcy, in tandem with a rapid expansion of the Covid-19 vaccination program

Mykonos: The big gun of tourism and the May 15 “D-Day”

Mission to the island of winds: Expectations for this season – How to overcome the virus issue

More than 1,000 guest speakers from 42 countries will take part in the discussions held at the forum

'Both sides expect a Washington visit to happen, and I think it will largely be determined on how things proceed in terms of finally defeating the pandemic and getting us back to the normal business of face to face diplomacy.'

The case is certain to attract public attention attention at a moment when side-effects from the various COVID-19 vaccines are the subject of furious public debate.

Greek foreign ministry calls for restraint by all sides in Jerusalem

Greece is gradually and carefully returning to normalcy, in tandem with a rapid expansion of the Covid-19 vaccination program

In a breakdown of the total Q1 figure for arrears, 2,164 billion euros are unpaid taxes by households and businesses

Mykonos: The big gun of tourism and the May 15 “D-Day”

Mission to the island of winds: Expectations for this season – How to overcome the virus issue

Editorial To Vima: Vaccines save lives

For better or for worse, all other tools for checking the epidemic – especially protracted restrictions on movement and the closure of businesses – have brought fatigue to citizens and societies.

The tribute was realized with the decisive contribution of the Hellenic Tourism Organization's (EOT) French Service and on the occasion of the official start of the tourist season in Greece for 2021. 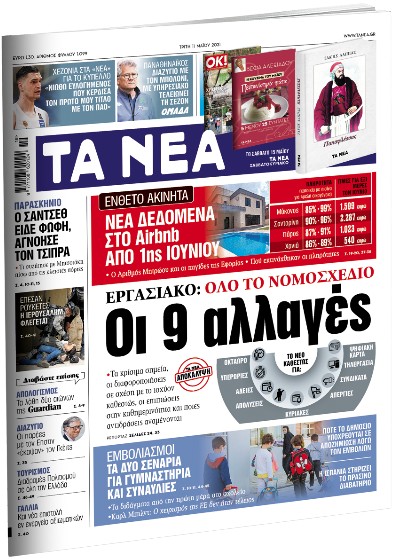