The biggest scandal in the history of Greek football sends PAOK and Xanthi to relegation and Savvidis finally out of football. What happened this summer, when Grammenos to pass a multi-ownership rule and was «forgotten»... from Avgenakis and FIFA. How do the Committee of Professional Sports and the Hellenic Football Federation regulations treat such violations.

One Channel’s shocking revelations that have seen the light of day have shaken the foundations of Greek football. Everything that has been mentioned with evidence on the TV «air» has proven prove that PAOK and Xanthi have a direct relationship, since the company of Ivan Savvidis owns the training center where Xanthi’s players are in a daily basis.

The regulations are relentless in such cases. Both the Hellenic Football Federation regulations, the leadership of which attempted to pass a rule legalizing multi-ownership in the summer(why?), and the Professional Sports Committee Regulations, explicitly prohibit multi-ownership and the penalties are the highest possible. The Clubs should be demoted and the people associated with both companies being banned from football for life.

Before we go into what the regulations say, let us remind you that just a few months ago Vangelis Grammenos’s EPO attempted to pass a provision that allowed multi-ownership. This caused a lot of reactions. First from FIFA and UEFA, but then from Lefteris Avgenakis, the Minister of Sports.

Indeed, on Tuesday, July 30, Grammenos had met with FIFA Monitoring Committee Chairman Herbert Hübel, who had asked for an explanation of the provision that went into the new regulations. What did  Grammenos answer to the Austrian official? That this was included … by mistake in the regulation and that there was no intent to serve any particu;ar interests. An answer from Grammenos, that proved to be a bad joke. Today the relationship between PAOK – Xanthi, suggests that he had a specific intention to pass it.

The reaction of Lefteris Avgenakis was strong. He contacted Vangelis Grammenos and strongly emphasized that such an arrangement would constitute a casus belli, and he expressed his queries about the fact that there was no mention of such a change duringtheir previous meetings.

Demotion for PAOK and Xanthi, lifelong ban for agents

Let’s look at what the regulations say about the very serious violations that exist and the evidence that Ivan Savvidis owns two teams. According to Article 30 of the Regulation of Foorball game, clubs are relegated and individuals are banned from football for life. 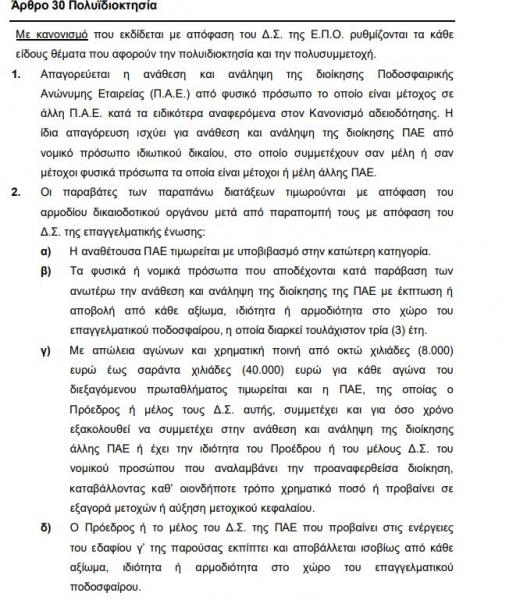 The Committee of Professional Sports (EEA) is relentless

The EEA explicitly prohibits in any way the relationship, even indirectly, of one football sports corporation (PAE) with another. IF a major shareholder of a PAE (in this case Savvidis) has a relationship with another PAE (in this case Xanthi) through his company, then the laws send him out of football and relegate the club. In particular, Article 30 (9), 10, 11, 12 and 13 of the Committee of Professional Sports on «Shareholders – Restrictions on the Acquisition of Shares – Prohibition of Multi-Ownership» states:

9. SAE, shareholders of SAE, members or directors of a legal entity of private law or company participating in the SAE capital, as well as spouses and second-degree relatives of all of the above natural persons, are prohibited, with the penalty of complete invalidity of the legal act, to acquire shares or administrative rights, directly or indirectly, or to assume managerial duties of another SA, the same or another sport.
10 .. Managers or members of the Board of Directors or executives of SAE, as well as spouses and their second degree relatives, legal entities of private law or companies acquiring administrative rights or exercising managerial functions of SAE, are prohibited, with the penalty of complete invalidity of the transaction, to acquire directly or indirectly shares or management rights or to assume management duties of another SA. of the same or another sport. This prohibition also applies to natural persons who either participate in management, exercise managerial functions or are members of the above legal persons or companies that acquire administrative rights or exercise managerial functions of a SA. Persons who are members or directors of such legal persons are prohibited from acquiring shares or undertaking management or managerial duties of the SA with the absolute nullity of the legal act. of another founding Athletic Association, as well as participating as members or administrators in legal entities or companies that are shareholders of such a SA.

1. The restrictions in paragraphs 9 and 10, with the exception of prohibitions addressed to the SAEs themselves, shall not apply when we are dealing with the acquisition of shares or management rights or the management of other SAEs founded by the same Athletic Association and active in a different sport.

12. Any acquisition, directly or indirectly, in violation of the restrictions of this law shall be deemed prohibited and shall be invalid. A prohibited indirect acquisition shall also be that which is achieved either through indirect persons or through another legal entity or company, if it is a related undertaking within the meaning of Article 32 of Law 4308/2014 or in which the person subject to those restrictions either holds more than twenty percent (20%) of the capital or voting rights, participates in its governing body or in any way in its management, or exercises a dominant influence over management or its operation, regardless of the percentage of the capital it has.

13. In any case, if any of the provisions of the preceding paragraphs of this article are violated with the involvement of the SAE bodies, in addition to the aforementioned persons, the club shall be expelled from the championship by a decision of the relevant court, which decides on the case following a report by the Committee on Professional Sport or following an appeal from anyone who has a legitimate interest. 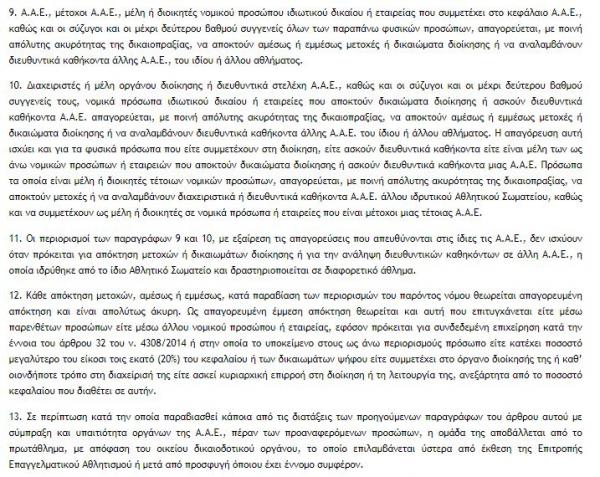