ingr > English edition > News report proves that Savvidis is owner of both PAOK and Xanthi FC. This means, demotion

News report proves that Savvidis is owner of both PAOK and Xanthi FC. This means, demotion

The evidence presented by One Channel cannot be challenged or denied. Savvidis is owner PAOK and Xanthi FC - This means, demotion

ONE channel TV Station has just presented a story that has shaken the very foundations of Greek football. An investigative report that followed a money trail that has fully corroborated what until now everybody had sensed but nobody had the courage or the evidence to prove it:

And this story has to do with the reality of the ownership of multiple Greek Super League Clubs by the same persons. A situation that has plagued Greek football and is something that does not just influence the championship; it is highly probable that it determines the outcome of the championship.

According to the investigative report presented by the TV Station, PAOK and Xanthi FC do not just share two persons, the goalie Zivkovic and the young half Meliopoulos – the latter, it should noted, has already quit football. They also share the same owner. They are two teams under the same ownership “umbrella”. This is the shocking evidence.

There has been an avalanche of rumors since last year. But the climax was the day of the Xanthi – PAOK match, when the entire Pigadia stadium was filled with PAOK fans, leading to season ticket holding fans of Xanthi FC being left out of the stadium!

It was at that point that everybody realized that the relationship between the boards of the two clubs was more than close. Now there is proof.

According to the investigative report by One Channel, in 2018 Ioannis Kalpazidis, the nephew of Ivan Savvidis from Kilkis, bought the facilities of Xanthi FC through the Cyprus based RFA company. This company bought the Vialand company, which belonged to Panopoulos and Syggelidis. 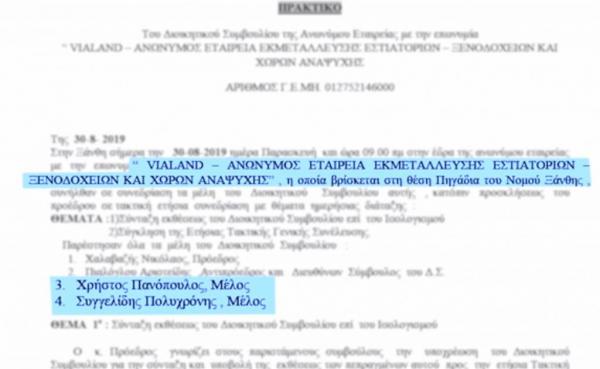 Vialand was the owner of the facilities of Xanthi FC. Shortly before the sale, a cash deposit of 10 million euro was made to the Cyprus based RFA company by Savvidis’s nephew and of course there are many questions regarding his actions. 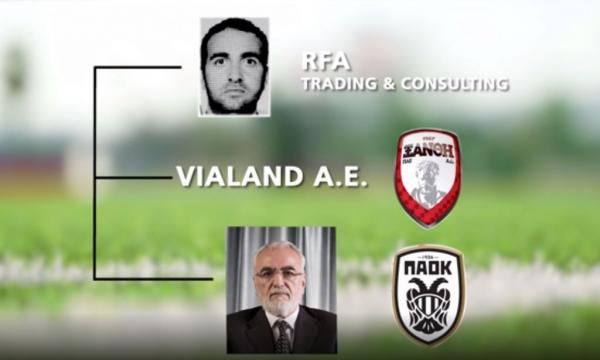 Has this amount been declared by Kalpantzidis to the Greek tax authorities?

Which is the trajectory of these ten million euro? What is their origin before they ended up in RFA?

Were they the price paid to buy Vialand? 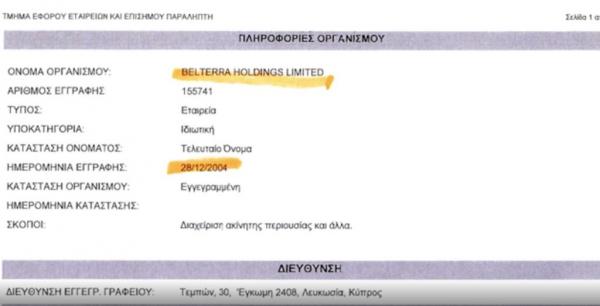 Kalpazidis did not just fall from the sky. Starting in 2008 at the age of 29 and for more than ten years he has appeared to be part of companies affiliated to Savvidis, including SEKAP. However, his appearance one year ago was different from the others, because he appeared with €10 million and bought almost the entire city of Xanthi.

RFA is not just another company. As the investigative report by One Channel stressed, for six years it has served loyally the interests of the Savvidis family and has acted as a shell company in almost all its business dealings. RFA appears to be connected to PAOK and Dimera, the Cyprus based corporation that bought the shares of the Thessaloniki based football club in 2012.

RFA has received loans from Dimera, in the same manner as other Savvidis affiliated companies. Another example are the loans to the also connected Belterra Holding, whose shareholders included in the past Giorgos Savvidis, today a member of the board of PAOK FC and now his mother Kyriaki Savvidi and his brother Nikos. 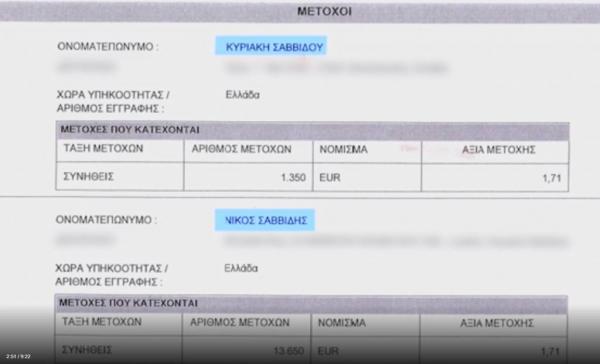 RFA was in 2016 part of at least 140 transactions of behalf of the Russian tobacco corporation Donskoy Tabac, which at that time was the jewel in the crown of all Savvidis’s businesses, and has now been bought by Japan Tobacco International. 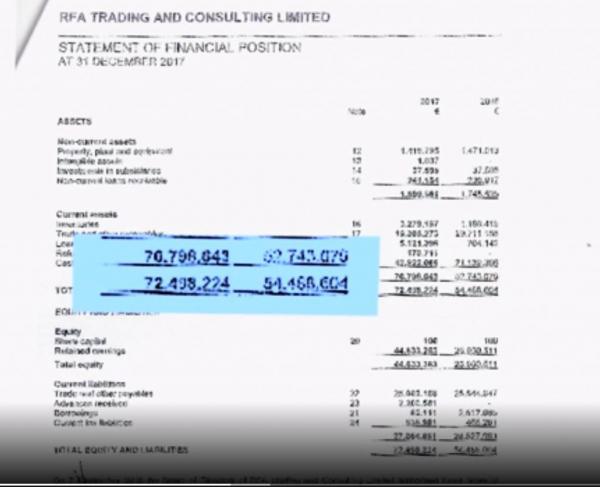 RFA has also dealings with Atlantis Pak, another of Savvidis’s companies, which owns Souroti and other assets. RFA also owns Paralot, which is well known for funding OPEN TV productions and is the sole owner of the SDNA sports website, which is owned by Ivan Savvidis.

All these point to how RFA functions as a shell company and is an important part of the wealth accumulating mechanism of the companies affiliated to Savvidis, with tens of millions of euros in its balance sheets. And now it has been revealed that RFA has bought the shares of Vialand, the company that owns the facilities of Xanthi FC.

The evidence presented by One Channel cannot be challenged or denied. And it is obvious that they shake the foundations of Greek football, at least in regards to its credibility, with unfair competition and satellite teams that alter results and consequently the fight for the championship. It is obvious that the Savvidis family through RFA fully controls Xanthi FC. This is a full and really tight control.

For example, if Ivan Savvidis decides that he wants to lock the doors of the Xanthi FC facilities, its players will not be able to exercise and practice. If he decides to lock the offices, he can do it. Even the hotel where the Xanthi FC team stays on the eve of the games (including the one against PAOK), is inside the facilities bought by RFA. 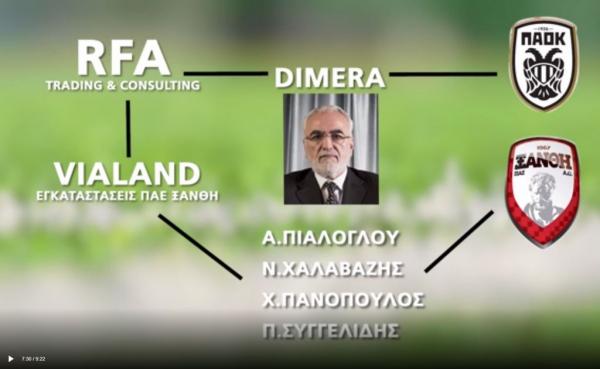 There are many open questions

Can a football club be really combative against an opponent who is capable at any moment of locking it out of its exercise and practice facilities?

Can a Football club really stand up against a Club that controls its exercise and practice centre?

What kind of corporate and… family bonds are created by means of dependency relations, such as those between Xanthi and PAOK

Aristeidis Pialoglou: President of Xanthi FC and CEO to a Savvidis company

The evidence presented at ONE channel are revealing and also touch other persons that appear to have very strong bonds both with Xanthi FC and the owner of PAOK Ivan Savvidis.

One of those is Aristeidis Pialoglou, who is widely known from his involvement in Xanthi FC. He sits on the board of Xanthi FC as president and CEO. The same person also appears to be the CEO of Vialand, the company bought by Savvidis’s RFA. In other words, Pialoglou is an employee of both Xanthi FC and Ivan Savvidis. This is a huge scandal. The other common person is Nikolas Xalavazis, who is the president of the Savvidis family business and a member of the board of Xanthi FC. 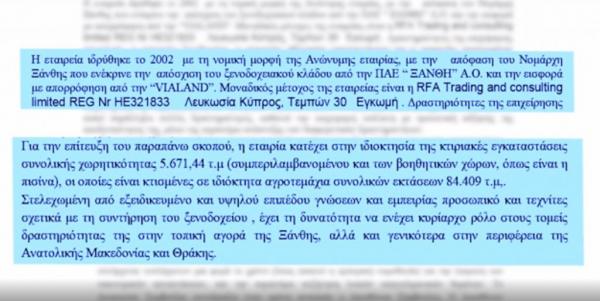 Panopoulos and the money he received from Savvidis 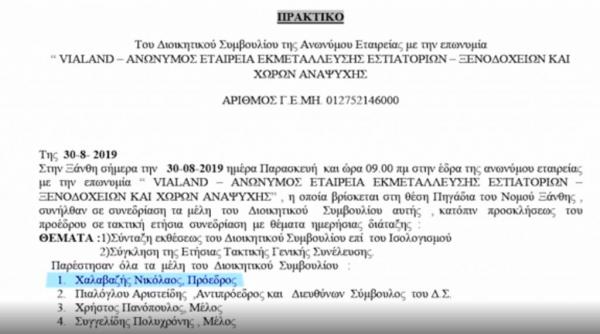 According to Greek legislation connected parts of a corporation are the members of the board and its shareholders. This means that Pialoglou, Halavazis, Panopoulos, and Syggelidis are considered connected to both Xanthi FC and PAOK, and consequently to the Savvidis family. Connected parts of a corporation are also other companies the control this corporation or exercise significant influence upon it. This means that Vialand, through RFA, is directly connected to Dimera, the corporation that owns PAOK and is affiliated to the Savvidis family

What does this mean for Xanthi? Is it still an independent and autonomous club?

How do all these make decisions about Xanthi? For example do they ask the players to really struggle to win a match, or not give too much attention to another, while at the same time they are employees of a Savvidis family company and PAOK? Indeed, what has the usually ready to have an opinion  Mr. Panaopoulos to say about all these, even if he has decided (?) to end his career in football?

There is only one thing missing and this is for the authorities to investigate and really examine this case in order to realize the obvious, what has been common knowledge for more than year: that PAOK exercises a dominant control upon Xanthi FC, something that came forward when the management of Olympiacos demanded an investigation that could answer who is the real owner of Xanthi. 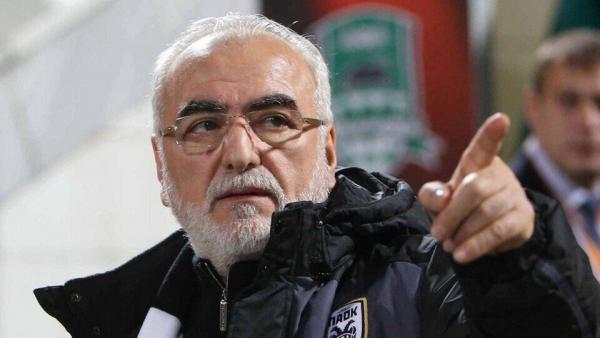 This is a disgrace for the championship and a scandal that violates any sense of credibility and integrity of both last year’s and this year’s championships. The evidence directly points towards Xanthi FC and PAOK being controlled by the same persons, something which according to the current statutes and limitations that govern Greek football means that they should be expelled from the championshiop.

Now it is up to the authorities and the Ministers that are responsible for Greek football to take a stance: are they going to just sit back and watch as they have done in the past? Or are they going to decide to investigate the matter? Before or after the coming match between PAOK and Xanthi FC on December 7? Are they going to act in a timely manner, or after the championship table has once again been altered, in the same manner as last year?

What happens if there is proof of multi-ownership? That is, if a businessman has two Football clubs under his influence? What do the statutes of Greek football say about such a situation? Both the Hellenic Football Association (EPO) and the Professional Sports Committee explicit forbid it. And the penalty can even lead both teams being demoted.