Dimitris Melissanidis – who in June will be tried in a New York court in a 300mn dollar corporate mismanagement case and who had previously gained notoriety through his outbursts in football stadiums as recorded in game reports – is once again currying for favour with the government by securing the support of Maximos Mansion and its occupant, PM Kyriakos Mitsotakis, to whom he had obtained access during the rule of previous governments and who was favourably disposed to his demands.

Obviously governments should meet up with businessmen and businesswomen but this must be done openly and publicly in order to establish cooperation with the various sectors of the economy.

That is entirely different than gaining access to power as a tool to promote your business and other interests that have nothing to do with the public interest and which are implicated in problematic situations.

Such a case involved the charges of mismanagement and fraud at NYSE-listed Aegean Marine Petroleum Network (founded by Dimitris Melissanidis) that led to its bankruptcy.

Beyond the lawsuit against Melissanidis, his close associate Spiros Fokas, and other company officials, all that the plaintiffs claim will soon be elements in the adjudication of the case in court.

The PM’s office might ask US Ambassador to Athens Geoffrey Pyatt about the obstacles with which auditors were confronted when they were seeking access to data on company management at the company’s Piraeus offices and if they were facilitated in conducting their probe.

They can also ask about the US Attorney General’s Office interest in and investigation of the case.

The case of AEK Stadium

Since the ailments of the previous government are being studied might they look into the AEK Stadium affair?

Can a man implicated in one of the most serious situations in a Greek city be a credible interlocutor for the PM’s office?

The huge push to advance the AEK Stadium construction process in that particular form and location caused a climate of terror throughout the entire city of Nea Filadelfia.

Organised groups of supposed fans undertook actions against city residents who dared to object to the machinations surrounding the stadium and against the Nea Filadelfia municipal authority which was elected with SYRIZA backing.

Since it is in vogue to open old cases why not revisit funding for the stadium by Attica Prefecture (during the administration of SYRIZA’s Rena Dourou).

A need to review EU funding

For example, would it not be interesting to probe whether the prefecture’s 20mn euro contribution and the 15mn euro in EU National Strategic Reference Framework (ESPA) funding have actually been spent on the project for which they were earmarked rather than being placed in the stadium construction budget?

Should one not examine the peculiar relationship between amateur AEK which will finally be the owner of the stadium, the AEK double-headed eagle of 1924 team which funded the project in its first phase but then was forced to break the contract so the prefecture could pay the money for the stadium, without lifting prior mutual obligations), and naturally AEK FC?

Another thing to look into while we are on the subject of AEK’s stadium is exactly how the money was raised in order to participate in the capital increase of AEK’s basketball team Dikefalos 1924 KAE which was made public last November and which was reported on in the press as a securitisation of money that had been paid for the project by Melissanidis and other businessmen that he rallied around the so-called group of 20 which they called G20.

When the news of possible fraud at Aegean Marine Petroleum Network broke, a Financial Times story maintained that part of the audit by Certified Public Accountants concerned payments to a company named Oil Tank which in turn appears to have loaned AEK 2.77mn euro for the construction costs of the stadium.

AEK denied this and maintained that the money was a loan to cover payments to football players during the period that capital controls were in effect in Greece.

Might the time be ripe to ascertain precisely the trail and amount of money that Mr. Melissanidis supposedly invested in AEK?

Melissanidis’ persistent attempts to regain access to power (the government) remind us of another issue which is none other than his involvement in the formerly state-run betting company OPAP S.A.

It appears that he has only a small share and that Czech investors with whom he has collaborated have control.

OPAP S.A. has another important dimension – it is one of the biggest advertisers in the Greek press and media – paper, electronic, and digital.

Much has been said and written periodically about the fact that this huge advertising expenditure secures significant influence over the media on crucial issues.

One wonders whether OPAP’s Board and its president, Dr. Kamil Ziegler, CEO Damian Cope, and the Sazka Group which represents the main shareholders feel especially comfortable when their Greek collaborators’ use of ad revenues as they fancy as a tool of influence.

Do they feel satisfied with the problematic situation at the racetrack where in a subsidiary of OPAP S.A. – Ippodromies S.A.-  the main role is played by Spiros Fokas (a defendant with Melissanidis in the Aegean Marine Petroleum Network case) and with the fact that the organiser of the games is also the betting organiser and exerts influence on the body that regulates the game?

Despite all that Dimitris Melissanidis believes he can curry favour and satisfy his demands with the current government.

Let us remember what happened when a previous government entered talks with Mr. Melissanidis.

When during the administration of PM Antonis Samaras the state (which had control of the company) sold off its share in OPAP, analysts said the price was low and yet the buyers piled up demands.

Then an FT story reported that there was an email in which then OPAP CEO Kostas Lavropoulos had been strongly pressured and threatened by Melissanidis.

A denial followed. The Samaras government was under pressure to meet bailout memorandum commitments with this privatisation (stock sell-off).

At the time Lavropoulos stated, “The references in the articles of the Financial Times in which my name is implicated are connected to business competitions.”

Will the current government have to cover for similar press reports?

The process for the utilization Kalamata airport begins

Delphi Forum – FinMin Staikouras: We will seek to get over 4 billion euros in 2021 from the Recovery Fund

Delphi Forum- EBRD President: “For us Greece is a success story”

She underscored the change of agenda in Greece in the field of climate change, one of the main priorities of the European Union 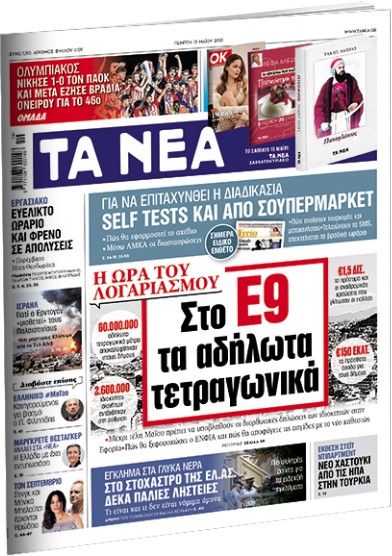