The failure to improve, even somewhat, the situation in Greece’s professional football sector is now being demonstrated on almost a day-by-day basis.

Supposedly a “blueprint” exists whereby impartial and untarnished people will comprise the Hellenic Football Federation’s (EPO) board, while a modern framework of operation was also close to being finalized; one aimed at upgrading Greece’s professional football product and image. This specific central planning, in fact, was achieved in communication with UEFA and FIFA.

One of the primary directions was that the Greek side would ensure that the EPO board to emerge truly wanted to change things for the better in Greek football, and that UEFA and FIFA, on their part, would commit to providing specific proposals on what needs to change in Greek football.

Results from the most recent elections for EPO’s board witnessed Thodoris Zagorakis being elected as president, as the initial proposal and agreement entailed, but essentially this proved to be a mere “decoy” tactic, as the remaining board members were elected via the same “traditional methods”, which led to the current situation, and where “untarnished” is not among the words that come to mind.

Nevertheless, genuine proposals for reform were on the forefront. It was these proposals, moreover, that were unveiled last November in the form of a “Holistic Study” by UEFA and FIFA to improve and upgrade Greek professional football.

This comprehensive study could have comprised the basis for a new start for Greek professional football, marking the beginning of promising reforms.

One would expect that both Mr. Zagorakis, who in a way supposedly is the one official who represents EPO in the initial agreement and initiative aimed at upgrades and improvement, and obviously, the Greek government, would ensure that even the present EPO board would comply with findings of the Holistic Study.

The critical moment for implementing these proposals and reforms was at EPO’s general assembly, scheduled for July 19, where the main item on the agenda was none other than to amend EPO’s charter.

Instead, the exact opposite will transpire. Several of the proposals cited in the Holistic Study for amending EPO’s charter will not be discussed at all, or, will be tabled in a watered-down form.

This was the recommendation by EPO’s executive committee, which essentially advocates a policy of “no change” in Greek professional football, with an announcement by this committee merely noting that proposals and interventions foreseen in the FIFA/UEFA plan will be “discussed and tabled” for a vote at the upcoming EPO general assembly.

What’s now clear is that EPO has no interest in losing any of its authority and power, and in the end, changing absolutely nothing in the way the federation operates.

Specifically, the proposed reforms that are being side-stepped or ignored are:

– Failure to establish a union of referees, which means that referees’ representatives will not participate in the executive committee or at the general assembly; only the president of the Central Officiating Committee will be participate, but without a right to vote. This means that one of the main problems in Greek football, and EPO’s operation, namely, efforts to manipulate officiating, will continue.

– Every individual regional and sector federation (such as those representing coaches, players, women’s football etc.) will still have one vote, instead of two votes at the general assemblies, as foreseen in the Holistic Study. This means that the situation will remain the same at general assemblies, i.e. the same blocs of vested interests, the same impasses, and the same “provincial” football club presidents exerting undue influence.

– Failure to implement  the provision of at least one woman member on the executive committee immediately, with the measure pushed back to 2024, in case of the resignation or suspension of a current member, as foreseen in the Holistic Study. EPO’s current leadership apparently believed that it should remain a “men’s only” club.

– EPO’s professional football committee will retain its purely advisory role, and not the decisive and binding role that the Holistic Study recommended. This means that instead of a federation organ that truly guarantees the implementation of rules and the integrity of Greek football, EPO instead continues to tolerate impunity and all the ills that afflict Greek football. This oversight, in particular, opens up the prospect of a very unfortunate development in the coming period. For instance, at any given point the bloc of “provincial” club owners can challenge the presence of the head of EPO’s Officiating Committee, Mark Clattenburg. And what if these “provincials” don’t chase away Clattenburg? They can just as easily decide about his close associates, as they did with Clattenburg’s predecessor.

All of the aforementioned can be summed up in a simple but very bitter truth: That the effort to change the situation in EPO, as had been promoted over the recent period, has utterly failed. AEK Athens and PAOK Thessaloniki owners Dimitris Melissanidis and Ivan Savvidis, respectively, continue to believe they must continue to “run EPO’s show”.

This is also a failure of the Greek government, and not just Sports Deputy Minister Lefteris Avgenakis alone, but of the government as a whole, which oversaw Zagorakis’ selection for EPO president.

Is there possible solution?

Yes! is the answer.

If Greek Prime Minister Kyriakos Mitsotakis wants to truly link his name with a new and bright situation for Greek football, a new page turned; a true reform, then his must proceed with a legislative initiative – just as the previous SYRIZA government did under then minister Stavros Kontonis, when with FIFA and UEFA’s acceptance they ignored whatever independent governance claims by EPO and legislated accordingly.

This is what needs to be done now. UEFA and FIFA have clearly understood what is happening in Greek football and the road-blocks placed before solutions by the current EPO leadership. Legislative changes must come now to produce needed solutions to overcome this impasse, to stop missing opportunities.

If we take into account that lack of vaccination reduces the possibility of achieving herd immunity, while the virus is reproducing and mutating, the right not to be vaccinated is irrational.

The target, as billed by the center-right government, is to raise supplementary pensions for current wage-earners when they retire, but without affecting older wage-earners and current pensioners.

This is a conference with a long history where participants are considered opinion makers and destination promoters.

If we take into account that lack of vaccination reduces the possibility of achieving herd immunity, while the virus is reproducing and mutating, the right not to be vaccinated is irrational.

The target, as billed by the center-right government, is to raise supplementary pensions for current wage-earners when they retire, but without affecting older wage-earners and current pensioners.

Despite the dangers and the opposition of a large segment of the Japanese population, it was decided to hold the Games with empty stadiums and with all necessary security measures to avoid transmission of COVID-19.

The process included the right of counter-offer via a relevant online platform.

Education Minister Niki Kerameus recently announced that 73 percent of educators have already been vaccinated or have booked an appointment, even as she urged the rest to follow suit. 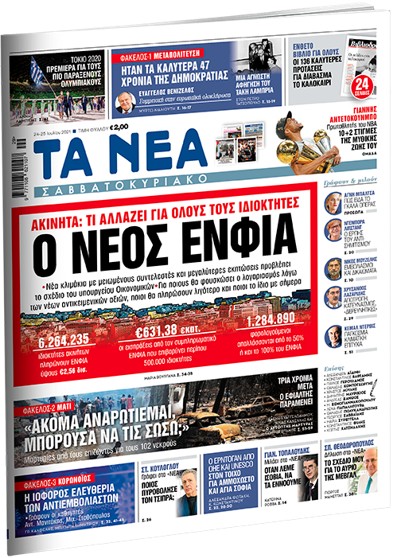