Mitsotakis claimed that it was the PM who erased accumulated fines imposed on one of Savvidis’ tobacco companies, and that in return Savvidis bought media outlets that are clearly pro-government.

Mitsotakis was addressing an audience at the Center for Strategic and International Studies in Washington.

Asked about Savvidis and growing Russian influence in Greece, Mitsotakis said that the question must be posed to the PM himself.

MItsotakis asserted that Greece has a “new generation of oligarchs”, who are much worse than their predecessors, and that the recent incident in which Savvidis entered a football stadium armed with a gun has shamed Greece internationally.

He said contemporary democracy is not so much threatened by coups, but rather by the erosion of institutions that constitute its foundations.

Answering FYROM Foreign Minister Nikola Dimitrov’s assertion this week that his country and Greece should share the cultural heritage of FYROM, Mitsotakis said that, “We have nothing to share from the cultural legacy of Alexander the Great.”

He said he is not particularly optimistic about how negotiations on the naming issue are going, though he recognised that the new government is Skopje is open to compromise. A package deal is needed, he said, a deal that will include a constitutional revision and settle issues of identity and irredentism, which remains strong in the country’s school books.

Economy and geopolitics
Mitsotakis said that economic recovery is a precondition for Greece to play a significant regional geopolitical role, but that Greece still constitutes a pillar of regional stability in an ever worsening and dangerous geopolitical environment.

“When the US looks at the region, where nothing can be considered a given, the message is that you can consider Greece a credible ally in a very unpredictable neighbor hood,” the ND leader said.

On the economic front, Mitsotakis stressed the importance of sustaining growth through an economic policy that focuses on attracting investment, and that he is prepared to implement tough reforms.

He said that the largest part of fiscal reform has been completed, but that deep structural reforms are still necessary to make the economy truly competitive and to overhaul public administration.

Mitsotakis underlined the need for Turkey to abide by international law in the Aegean and Cyprus, and he issued a call for the return of the two Greek army officers that have been imprisoned in Turkey, on charges of illegally entering the country.

“I publicly call on Turkey to free the two Greek army officers as soon as possible. There is no reason for them to be incarcerated in a top security prison. This issue must not be turned into a significant diplomatic episode,” he said.

Signs of recovery in passenger traffic at the country’s airports with an increase of 673.4% recorded in May

Greek Tourism: Fortunately there are Germans…

Mitsotakis: The 10 bold reforms of the labor bill

With the labor bill, we separate strikes from illegality, the prime minister underlined

Signs of recovery in passenger traffic at the country’s airports with an increase of 673.4% recorded in May

Greek Tourism: Fortunately there are Germans…

New One & Only resort in Athens by Kerzner International

Kerzner International continues its strategic development with the construction of the new One & Only resort in Athens.

Mitsotakis: The 10 bold reforms of the labor bill

With the labor bill, we separate strikes from illegality, the prime minister underlined 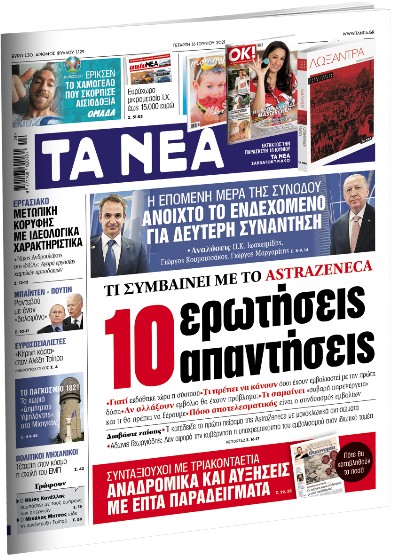