When the Greek state was established in 1830, many historians, influenced by great Greek enlightenment thinkers such as Adamantios Korais, attempted to delete the over 1,000-year Byzantine Empire and the nearly four more centuries of its cultural impact from the history of the Greeks, creating an artificial bridge between antiquity and modern Greece.

Decades later, that model was radically changed by the 19th century historian Konstantinos Paparrigopoulos, who attempted to establish the unbroken historical continuity of Hellenism from ancient to Modern Greece, with due attention paid to the lasting cultural glories of Byzantium, not least of which was its illustrious musical legacy.

That this legacy will be celebrated this evening right under the Acropolis, at the famed ancient amphitheatre of Herodes Atticus, with a mix of compositions of famed Greek composer Andreas Katsigiannis, in a concert entitled “Megales Ores” (Great Hours, also called Royal hours) is therefore only fitting.

In the Eastern Orthodox Church, the Great Hours are celebrated only three times a year: on the Eve of the Nativity, the Eve of the Epiphany or Baptism of Christ, and Good Friday.

At each of the Hours, one of the three fixed Psalms is replaced by a Psalm that is directly linked to the feast being celebrated, and the regular liturgical hymns are replaced by numerous other hymns chanted by the choir. Each Hour has an Old Testament, an Epistle, and a Gospel reading.

A unique oratorio based on Orthodox theology, spirituality

«Megales Ores», however is not a presentation of the Great Hours in the style of Byzantine hymnography, but rather an ambitious, original oratorio – with the participation of the Athens State Orchestra, conducted by maestro Stathis Soulis, a 32-year-old rising star, and 100 choristers from three choirs –  that through a series of narrations and hymns, many to the Virgin Mary, tries to lay out the distillate of Orthodox theology, with a focus on the quest for truth and light, the light of Christ and the «uncreated light of God», which Orthodox monks seek to reach through perpetual prayer.

The oratorio is comprised of two separate works – «Place of Silence». dedicated to the famed Athonite monk and spiritual father, Saint Joseph the Hesychast of Mount Athos’ Vatopedi Monastery (whose Pemptousia website and Orthodox cultural project released it on CD and organised the concert), and «Keharitomemi» (Mary full of Grace), dedicated to the Virgin Mary, which will also be released by Pemptousia.

As Katsigiannis said at the end of the concert, after the entire audience rose to sing together the great Constantinopolitan hymn to the Virgin Mary «Ti Ypermacho», who was protectress of the capital of Byzantium. the work was composed during the dark days of the pandemic quarantines, during which he sought to transcend the darkness by combining his religious faith and art in his own personal quest for a deeper, transcendent and salvational light and truth.

The search for truth in Orthodoxy’s ‘uncreated light’ of God, Greek thought diachronically

The work is inspired by and imbued with the Greek Orthodox Athonite monks’ tradition of hesychasm, the theological concept that one can reach communion with the uncreated light of God’s truth through perpetual prayer. It created a huge theological dispute in the Byzantine Empire in the 14th century, but in the end prevailed.

The six narrations that punctuate the oratorio weave a complex tapestry that combines Orthodox theology with the diachronic quest for truth and light in Greek thought, from philosophy (especially Plato, who through neo-Platonism especially has had a strong impact on Orthodox theology, but also Heraclitus and Anaxagoras), to ancient drama (with extensive references to Euripides’ Hippolytus), and poetry (from Homer to Odysseas Elytis).

In an exclusive interview with To Vima, Katsigiannis speaks of the spiritual underpinnings of the works that comprise the Great Hours, including “Siopis Topos” (Place of Silence), and how modern audiences can connect with the wealth of the  heritage of Byzantine music and Orthodox theology.

“Often I wonder whether in the end such a composition can touch and enter into a dialogue with society. My experience with the first cycle of the Great Hours, entitled «Siopis Topos» (Place of Silence), brought me optimistic feedback. There were people of different generations and ages that were moved, and understood the musical climate and my internal need to express myself through the art that I serve on a matter that is so personal for each person individually, but also for the composer,” Katsigiannis said.

“Byzantine music is a high art, an art that it closely intertwined with the culture of our people. It is an art that combines the East with our religion and tradition,” Katsigiannis said.

“I was lucky because I grew up in a home where we heard all sorts of music, and I learned to respect each genre and to love the tradition of our people. Hence, just as I studied and continue to study the other types of music of our people, of our national music, so, too, I studied Byzantine music, and had the good fortune to have great teachers, such as Manolis Hatzimarkos and Manolis Meletis. If you listen carefully to my music, you will always find such elements even in my compositions that are the most Western in style.”

In tonight’s concert, Katsigiannis aim was for the audience to sense a spiritual fullness. Judging by the fact that it brought the house down, that objective was achieved.

“I want them to be filled with feelings of joy, not in the sense of the joy of entertainment, but with the fullness that music creates. I want them to pay attention to the words, and for each person to travel, so that the small moments of a concert can be transformed into the Great Hours of something new, that will be born inside them,” he said.

Renowned Greek  singers Glykeria and Dimitris Basis (photo), along with famed American actor, musician and author Jonathan Jackson (who has converted to Eastern Orthodoxy), sang in the concert.

The three choruses that participated were: “Chorus Vivendi” with maestro Ioannis Vryzakis, the “Melodoi” chorus of Nea Smyrni under maestro Georgios Ziakas, and the University of Thessaly Chorus under the direction of maestro Nikos Chiotoglou.

Katsigiannis is preparing to take “Megales Ores” on tour to Cyprus, the US, and Central Europe.

Melina Travlou, who earlier this year was elected the first female president of the Union of Greek Shipowners, was named Greek Maritime Personality of the Year

In the coming weeks, the first construction sites of the northern Crete highway

The two people arrested re the 52-year-old contractor who undertook the conversion of the heating burner into a geothermal heat pump at the school in question and a 43-year-old electrician.

The Minister of Development foresees the FDI streak will continue

Big and small toy stores, supermarkets and technology chains will participate in the toy basket – Why there is a ceiling 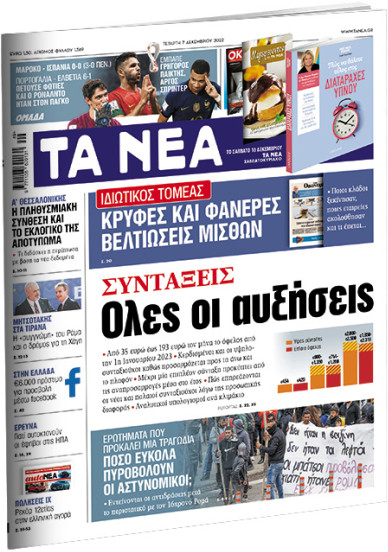