The administration of the Hellenic Hydrocarbon Resources Management S.A. (HHRM S.A.) sends clear messages to the political leadership of the country, the social and environmental bodies regarding the fate of the ambitious plan that was opened a decade ago for the exploration and exploitation of natural gas deposits.

In the light of the energy transition to clean, carbon-free 2050 and the intermediate emission reduction targets of 2030, transition of Greece as a reliable and flexible fuel “. HHRM reminds that CO2 emissions are 50% lower than fossil fuels and at the same time describes the country’s prospects given the estimates for natural gas reserves in the subsoil of concessions:

“Apart from the emerging role of Greece as a ‘hub’ of natural gas in the region, the country is also considered to have significant gas reserves,” said the HHRM administration. The reserves overshadow those of countries that are already exploiting their resources. “The potential benefits of releasing Greece’s domestic gas reserves could be significant: not only in offsetting the significant cost of imports, but also in the possibility of creating an export surplus, given the guaranteed domestic consumption of natural gas.” Speaking about the potential of Greece as a producer country, while at another point it underlines that the economic benefits could have a transformative impact. ”

HHRM acknowledges that “the hydrocarbon sector has undergone its greatest transformation since its inception almost 200 years ago, driven by the growing awareness that our world urgently needs to become a more sustainable low-carbon economy.” It mentions the expansion and redirection of the strategy of the big multinational oil and gas firms and cites as an example the Spanish giant REPSOL, which abandoned the exploration of hydrocarbons in 14 countries, including Greece. It is recalled that the company returned to the Greek state the research and exploitation rights it had in the area of ​​”Etoloakarnania”, while it also withdrew from the concession “Ioannina” that it had undertaken with Energean.

“This is the complex and uncertain business environment in which HHRM seeks to attract investors and promote activities to obtain reliable data on the size and commerciality of potential hydrocarbon deposits in Greece,” its management emphasizes.

The state-owned company that manages the rights of the Greek state for the exploration and exploitation of hydrocarbons claims that the utilization of natural gas resources is in line with the achievement of the goals for the “green” transition: “Greece still has a window of opportunity “, to generate revenue from its national resources and these efforts do not contradict the ambitious green transition of the country, as it develops”, he states.

In another paragraph of the annual financial report it underscores that the window to take advantage of the opportunity has a finite time horizon of 30 years – despite the potential continuing role of gas, e.g. in the production of Blue Hydrogen “.

HHRM also talks about the possibility of utilizing natural gas beyond its use in electricity generation, heating, heavy industry and transportation and this is the production of blue hydrogen.

The company has established a Department of New Activities which has already undertaken actions in two primary areas that are directly related to the existing activities of the company:

1. Carbon capture and storage (CCS) for captured CO2 emissions (related to current exploration, but also for technologies such as Blue Hydrogen) and

2. The application of offshore renewable energy sources, such as floating wind farms (FOW), where long-term offshore oil and gas know-how could make a significant contribution to technical solutions, as well as to health and safety management.

“Both of the aforementioned technologies present a wide and unique range of synergies with the existing and possibly new plans for the development of oil and gas activities, which could emerge after the exploration efforts in Greece”, notes EDEY.

HHRM twice in its annual report sends clear messages and especially to the political leadership of the country in order to manifest a clear decision regarding the exploration and exploitation of natural gas deposits.

“In this context, of course, one has to weigh the risks associated with hydrocarbon exploration. This is especially true in a geographical area, such as Greece, which is dependent on tourism revenue thanks to its global recognition as one of the top travel destinations in the world, thanks to its cultural heritage and unparalleled national beauty,” says the HHRM administration and underlines: “Obviously it is not up to HHRM to determine what is the right balance of these factors. This is a decision of the Greek people and their elected representatives. Recent polls show that combating climate change is generally considered by the population to be a critical priority for government and all industrial and economic actors. At the same time, polls also show that a significant majority (ie 80% of the representative demographic sample and political beliefs), are in favor of efforts to develop and generate revenue from the exploitation of the country’s natural resources in hydrocarbons.

The deposits of Crete

The “uncertain and complicated” environment for hydrocarbon exploration in our country, as described by the administration of HHRM becomes more complex after the last statements of the US Ambassador to Greece Geofrey Pyatt.

The ambassador in an interview with Greece Investor Guide and asked about hydrocarbon exploration in Crete (Total – ExxonMobil – EL.PE) and whether they are in line with the green agenda of our country, the US ambassador replied: “The energy transition is a real event and is in progress . There are, however, intermediate stages. As in the phase of complete de-lignification, natural gas will play an important role. The issue is where the natural gas will come from,” he said making special reference to the international infrastructure projects, such as the TAP pipeline, the FSRU Alexandroupolis and the Revythousa terminal.

And Pyatt continued in his interview: “If Greece wants to continue research in the field of hydrocarbons, it has to do with what decisions the market will take. It is very obvious that even Greek energy companies, such as Hellenic Petroleum, are looking for ways to green their energy portfolio,” he stressed and pointed out:” The financing of large investment projects depends on the decisions of the license holders. I know that ELPE recently returned to the public licenses (“Arta – Preveza” and “NW Peloponnese”). I know that ExxonMobil, which is a partner of ELPE and Total in the plots in Crete, continues to look into the case. But the US priority is for Greece to continue to be the guarantor of the EU’s energy security, but also to implement the energy transition, as promised by Prime Minister Kyriakos Mitsotakis… »

It is worth emphasizing that the consortium of maritime concessions of Crete, based on the concession agreement, has time to conduct the first seismic surveys until the winter period 2021-2022.

ELPE sources were asked to comment on whether the statements of the US ambassador hide a change in strategy for the American firm ExxonMobil. As noted in OT. gr “The consortium partners continue to work normally for the research in the maritime concessions of Crete. So far, ExxonMobil has not officially announced any change in its plans.”

Pregnant women, who get mRNA vaccines, pass high levels of antibodies to their babies, according to a study made by researchers at the NYU Langone Health System

Mitsotakis, Elpidophoros to meet after government’s row with Archbishop of America

The protagonist of the film Χello, inspired by a black-figure vase, comes to life and represents a happy, friendly figure who immediately wins over the children and at the same time invites them to follow him on his journey to Greece.

Pregnant women, who get mRNA vaccines, pass high levels of antibodies to their babies, according to a study made by researchers at the NYU Langone Health System

Greek Health Minister – More than 600,000 people over the age of 60 have not been vaccinated yet

“90% of people in the intensive care units (ICUs) are unvaccinated. It is a pity that lives are lost because people do not get their jab,” said the Greek Health Minister

When and how will retroactive payments be made to retirees

According to Ministry of Labor officials, the process of recalculating pensions is an extremely complex and, therefore, time-consuming process

'Let me point out that it is the UN Charter which bans the use or the threat of force. However, since 1995 Greece has been facing a formal, regularly renewed and clearly illegal and unacceptable threat of the use of force by Turkey,' the PM said.

Mitsotakis, Elpidophoros to meet after government’s row with Archbishop of America

The problem, say those in the left wing who sought to justify Spirtzis’ political foul regarding the culprit in the latest femicide, is that someone who had been charged with abusive behaviour continued to possess a rifle.

Bakoyannis at Monocle – “Athens has been reborn, despite the difficulties”

“If you walk in the city, you will quickly find that it is not just the Acropolis”, stressed K. Bakoyannis speaking at the “Quality of Life” conference of Monocle 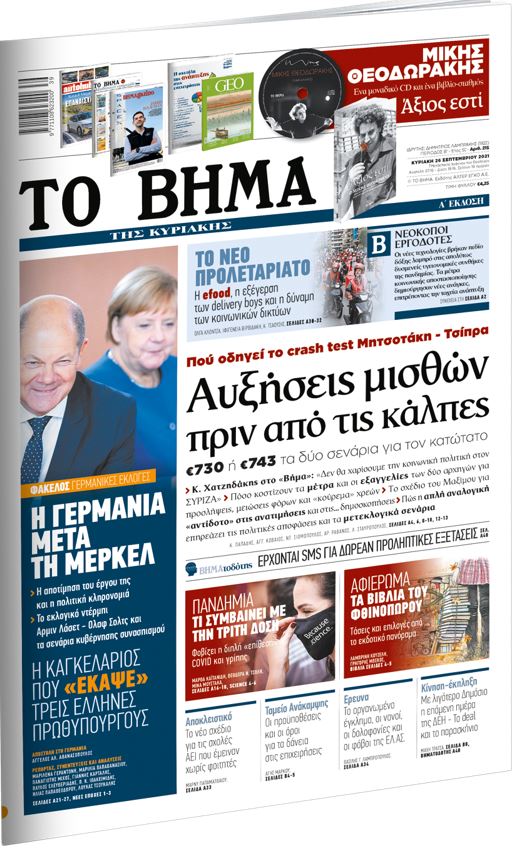