Editorial To Vima: An era of indeterminacy and uncertainty

Geopolitical constants have been lost, developments are being shaped elsewhere, and Greece for the time being cannot have the impact that it deserves and would want to have.

The course of events in the broader region of the Southeastern Mediterranean is exceptionally indeterminate.

Today no one in Athens can predict the course of events.

How will the situation in Libya evolve? Will the warring sides under the auspices of Russia and the good services of Germany reach an understanding and make peace or will the Libyan Civil War drag on and trigger the intervention of Turkey as announced by Tayyip Erdogan with all that this entails.

If that occurs, what will Egypt and other countries of North Africa do? What will the impact of these events be on Cyprus? Could a potential clash spill over to the Aegean and trigger undesirable developments?

Moreover, can any US or EU involvement be effective and if not to what degree can Greece handle a protracted crisis with a hostile neighbour who has no compunction about making fresh demands at every opportunity?

Then again one is confronted by the migration-refugee crisis which Ankara is using as leverage, stirring domestic tensions in Greece.

All of the above illustrates the indeterminacy of this period and makes for the insecurity resulting from an unstable environment which is multiplied by the fact that Greece is essentially an observer.

Geopolitical constants have been lost, developments are being shaped elsewhere, and Greece for the time being cannot have the impact that it deserves and would want to have.

That cannot last for long without harmful consequences.

The country’s foreign, defence, and security policy and diplomacy must be coordinated and mobilised and remain vigilant.

There are many reasons that justify a more active role for Greece in regional developments. It can offer its good services in regional peace-making, defend its rights, and show its neighbours that they cannot act in an arbitrary manner and behave as conquerors.

Athens must make it clear in a sufficiently stern manner that Greece does not play around with its national rights or back down in defending them, so that everyone will know that they stand to lose in an unchecked crisis.

Our era is fraught with danger and demands more dynamic moves and decisive choices.

Statements of good will no longer suffice.

It sees a slowdown in the Greek economy, but growth above the European average 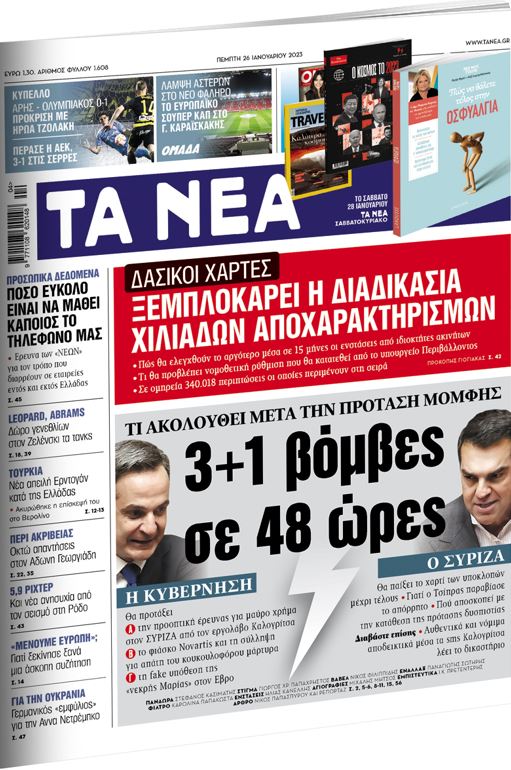