Top mass media have praised the British team for its initiative to offer 3000 food parcels to homeless people of the city. Nottingham Forest’s intense charity activity has drawn the attention of international media.

When Evangelos Marinakis took over Nottingham Forest FC he set as goal the return of the club to the Premiere League but also its closer connection with local community, in the form of intense charity action by the Club, action which will support the people living in that area. These have been two goals that Marinakis has been striving with all his resources to accomplish.

As far as the first goal is concerned, the Greek ship-owner and his associates worked really hard last summer to add top players to the team’s roaster that will help it return to the Premiere League. And indeed this is an effort that has already brought results, with the team being, after the first half of the season, at just two places below entering the play-offs and five places below the top.

At the same time, the leader of Olympiacos FC is trying to fulfill the second promise he gave when he took over City Ground’s historical team. Ever since Evangelos Marinakis acquired a majority share of the club, Nottingham Forrest has been engaged in important charity activities, with the biggest news websites, praising the British team of the important initiatives it undertakes to the benefit of the people living in that area.

Last Saturday Evangelos Marinakis took the initiative and the people of Nottingham Forrest put it into practice and donated food parcels to the homeless of the broader area. After a strong rainfall in the broader Nottingham region led to the postponement of the game with Reading FC, the management of the team decided to give to the homeless the food that would have normally been consumed by the fans at the stadium during the match. More than 3000 food parcels went to those in need and British Media have praised this important initiative by Nottingham Forrest that made its many fans really proud of their favorite club.

It was this move that led CNN to draw a comparison between Nottingham Forest and the legendary hero of that area, Robin Hood who helped those in need during Medieval times. It was an important initiative which was covered widely by British media that published many photos from the distribution of the food parcels to the homeless people in the area.

According to the BBC, “the food was put in more than 3000 parcels which were donated to the homeless of the area”, which also mentions the help that the British club offers to Hope Nottingham, a food bank that has been created. It is an organization that offers assistance to the homeless and other persons in need in the area, offering them food, clothing, medicine and whatever they might need for their houses. Moreover, there are references to the help that Nottingham Forest offers to the schools of the area but also to other organizations that do charity work in the area. 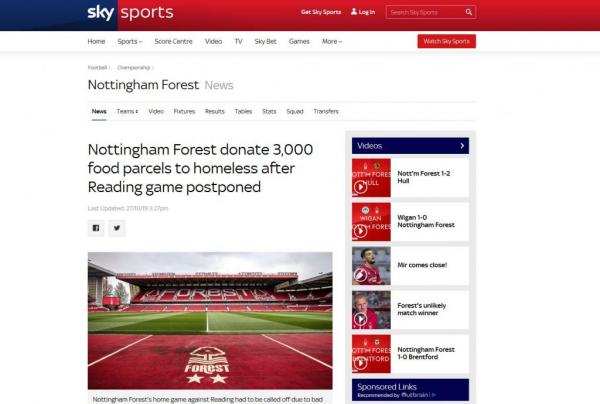 In the article that appeared in CNN, one can find a statement by the Club Director of Nottingham Forest FC, Jonny Owen, who spoke about the intense charity activity that the club has undertaken after the coming of Evangelos Marinakis. “These kinds of initiatives are of paramount importance to Nottingham Forest Football Club, coming straight from our owner Evangelos Marinakis who is a great believer in working in the community to help the area improve and grow,” Jonny Owen said. «By donating these food items, we were able to help those who need it most in the Nottingham community, those people who are at the sharp end of homelessness, as we continue to try and tackle the issue in the city,» he continued.

This initiative by Nottingham Forrest and Evangelos Marinakis really made proud the club’s fans who see their beloved club to be actively on the side of their fellow persons in need. “I really like the direction the team is going. What is happening in the field is equally important with what is happening outside the field, as far as I am concerned”, one of the fans said. “Congratulations Nottingham Forest! A gesture of kindness that can make us believe a little more in human kindness. They are doing a lot for the homeless in the area. They help the local community with money, food and other actions”, another one stressed.

Nottingham Forrest, with these important initiatives by Evangelos Marinakis stands by the side those in need, in a period when in Great Britain thousands of people become homeless each year and there were 276 deaths of homeless in England and Wales in 2018, a 22% increase on the previous year.

However, this is not the first time that Nottingham Forrest expresses its social responsibility. As we have already mentioned, by cooperating with Hope Nottingham, the club constantly helps the people of the area. In July 2018 the club, in cooperation with its fans it gathered money that was sent to Greece to help the victims of the deadly forest fires in Mati. 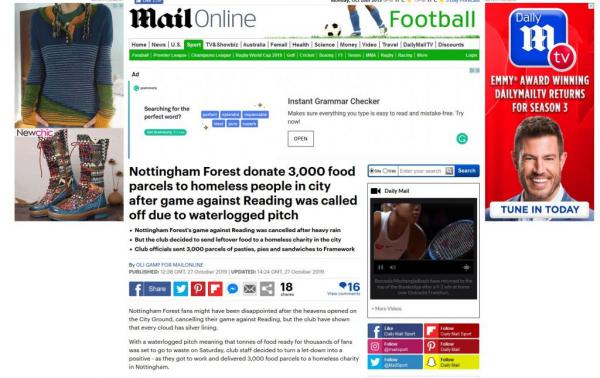 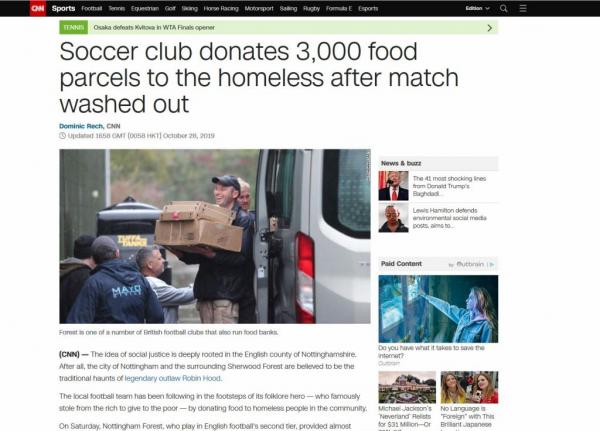 It is also important to note that last July Nottingham Forest also made an important move by helping its ‘arch-rival’. The staff of Notts County FC had not received any pay for many months and Evangelos Marinakis’s club decided to help by donating an important part of the of the ticket sales of the Club’s friendly game with Sociedad. Money that went to Notts County FC coffers in order to pay the wages of the Club’s staff.

These are important actions that show that Nottingham Forest is not simply a Club. It is a part of the local community standing side by side with its people. Besides, we have seen similar initiatives in Greece with Evangelos Marinakis’s Olympiacos assisting refuges at the port of Piraeus in 2016, by donating food, clothing and other necessities. 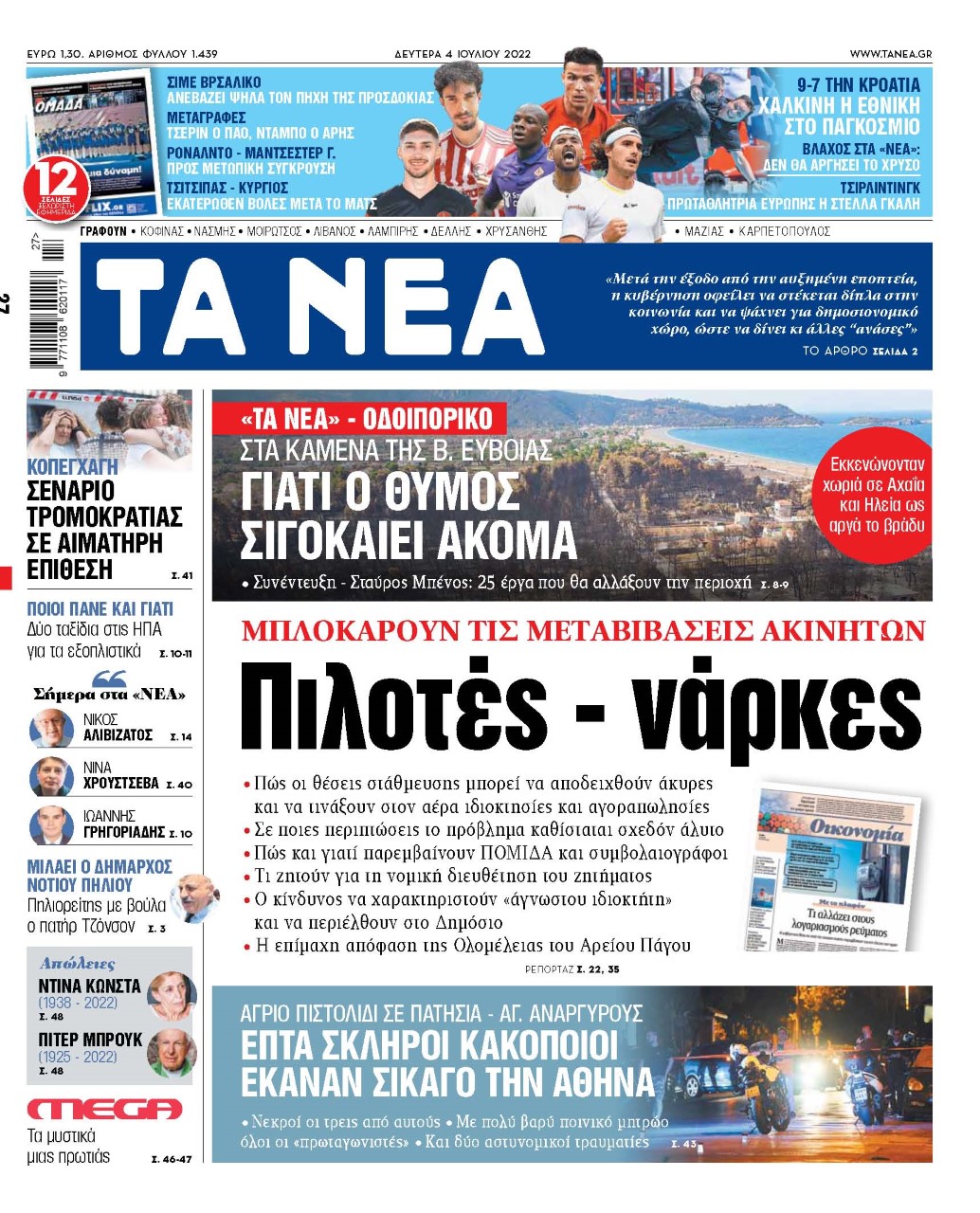