'Very soon it became clear to me that the General Secretary of Telecommunications and Post Offices has assumed, with the toleration of the minister, the role of ‘Space Czar’ in Greece, even though he has no knowledge or experience in this field

In a blistering attack on PM Alexis Tsipras’ right-hand man and Digital Policy Minister Nikos Pappas, the letter of resignation of Hellenic Space Agency (HSA )Chief Stamatis Krimizis accuses the government of a lack of transparency and meritocracy in running the new agency, over which Pappas wields political authority.

In an open letter of resignation, Krimizis wrote that there has been a need for a Greek space programme for three decades, but that two ministerial decisions this year “essentially annulled HSA’s reason for existence”, transforming it into an “untrustworthy bureaucratic structure that could be manipulated by any political supervisor”.

The full text of Stamatis Krimizis’ open letter of resignation, translated from the Greek, follows:

“Under the shadow of exceptionally unpleasant developments in the operation of the newly-founded Hellenic Space Agency (HSA) and my participation as President, I feel the need to make public my resignation from that office, and to inform, with fitting responsibility, the reasons that made it necessary.

With my letter to the Minister of Digital Policy, Communications and Information, on 16/4/2018, I resigned from the Presidency of HSA, after staying on for only four weeks and for three Board meetings.

The reasons that led to this unpleasant decision I believe will be easy to comprehend. My priority was and remains the good of the country.

The need to create a space agency in Greece was imperative for the last 30 years. The government’s initiative was applauded by the scientific and technological community, and by Greece’s friends abroad.

Admittedly, the structure and principles of operation of HSA which we initially proposed (spring, 2017) with the informal working group which I chaired upon the invitation of the minister, was in accord with international guidelines.

Certain imperfections in the draft law – which ended up being the HAS founding law (4509/2017) – that were noted in a memo, were manageable, as the minister assured me.

However, Ministerial Decisions that followed (3095/2018, Government Gazette volume 915, 15/3/2018), in practice annulled HSA’s reason for existence, rendering it an untrustworthy, bureaucratic structure, that could be subjugated to any political supervisor.

Unfortunately, very soon it became clear to me that the General Secretary of Telecommunications and Post Offices has assumed, with the toleration of the minister, the role of ‘Space Czar’ in Greece, even though he has no knowledge or experience in this field.

It seems, therefore, that I am superfluous, if I do not accept to be anyone’s mouthpiece.

The current legal framework, as implemented by recent ministerial decisions, mutilated the HAS, transferring its powers, such as representing the country at the European Space Agency (ESA), to non-expert ministry employees.

Unfortunately, conditions thus arise which undermine what I like to call the triple A (Greek acronym) – evaluation, meritocracy, and excellence – and render it impossible for me to participate.

My assessment is that there is a clear effort to manipulate HSA in predetermined directions. I discerned a clear propensity and often insistence upon promoting actions without evaluation, without meritocracy, far from international standards, in order to serve personal agendas, and to establish full control by the General Secretariat.

The most unpleasant surprise, however, was that HAS was excluded by Ministerial Decision (3095/2018, Government Gazette 915, 15/3/2018) from the evaluation and management of all Space Programmes of the European Space Agency (about 16 million euros), a competency that was transferred to selected administrative employees of the General Secretariat of the Ministry, contrary to all international practice and logic.

The management of programmes of the ESA, to which our country pays an annual contribution, is institutionally and essentially under the purview of each country’s Space Agency. The critical nature, complexity, and economic magnitude of such programmes mandate the involvement of specialised and experienced personnel, of distinguished stature and knowledge. That is the only way to effectively and rapidly implement complex programmes that require specialised knowledge. Every divergence from that is suspect, as it creates conditions that are not transparent. I say this as one who was the only person to supervise implementation of a space programme that was completed with absolute success, earlier and less expensively than projected, with a return of funds to NASA.

Unfortunately, the General Secretary did not limit himself to the institutional downgrading of HAS.

Indicatively, whereas the National Centre for Scientific Research Demokritos offered office space for HAS, with the prospect of a new building in the long run, the General Secretary objected, insisting on installing us on a ministry corridor, right beside his office, for reasons that I imagine are understandable.

Imagine the image and impression that would be gleaned by visitors – ESA leaders and the heads of other countries’ Space Agencies – when they would have to navigate the corridors and offices of a multi-storey building amidst employees with no connection to HSA.

Understanding that there arises a question of possible financial interests, I want to be clear on this.

When one announces in advance a 23.9 million euro programme for 11 microsatellites, one expects there to be studies regarding its aims, specifications, the infrastructure construction plan, a realistic timetable, and the suitable personnel to implement it, especially when it is accompanied by pledges of swift completion.

Unfortunately, those presuppositions do not exist, and I saw that the role of HSA in the programme is purely formal and predetermined.

Certainly, there are interests in the involved organisations and companies, without that necessarily being bad, as long as the conditions of transparency in a free economy are enforced. The presupposition for the success of such a programme is transparency and evaluation by experts at all stages of implementation.

When the exclusive management is undertaken by some General Secretariat and pre-selected state functionaries with no experience in space programmes, the effort is problematic from the start, decisively non-transparent, and without particular trust in the successful completion of such a complex project.

I must note, however, that nothing criminally punishable came to my attention, nor is it my role to probe something like that.

However, I remember that in the US, during the Watergate probe, the saying “follow the money” became popular.

In closing this unpleasant but necessary description it would be an omission not to thank the rest of the members (those who resigned and those who stayed on) of the short-lived first HSA Board, for our brief collaboration.

I feel the need to clarify why I felt the need to become involved in this whole process. The truth is that at the beginning, I discussed analytically the necessary specifications for the proper operation of the Agency, and I was offered multiple personal assurances regarding its meritocratic and serious operation.

When I was called upon to serve my country, from a position that I know very well, I considered it my patriotic duty to accept.

I requested and received the necessary assurances from the Minister, but in the end these were not honoured. I tried to do the best possible, utilising the best people. Unfortunately, the effort did not come to fruition.

Over the last 13 years, I have traveled and lectured all around Greece, encouraging school students, university students, young people, and associates, whom I see every morning trying to continue, despite the difficulties.

I could not disappoint them by constituting the exception, refusing to help when it was asked of me. 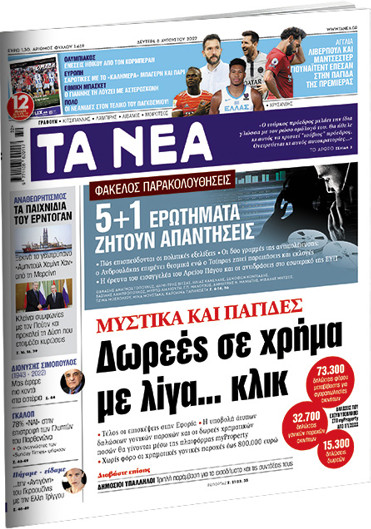