Greek tourism is “looking” for a strong finish that will confirm a very good year taking into account the covid pandemic. After the very good August that in the whole country seems to have reached capacity at the level of 80%, what Greek tourism is now looking for to lock the goal of “50%” (tourism revenue 2021, as a percentage of tourism revenue in 2019 ) is for the “tail” of the tourist season to go well in the summer destinations and to record a satisfactory interest for Athens in the two months of September and October, two months that are historically “high season” for the capital.

These are the two areas in which the country’s tourism industry is focusing its attention in the near future in order to have a definitively good season for this year, always under the condition that we will not have an outbreak of the pan-European pandemic in Greece as well.

Who is staying open until November

For Athens as a destination, hoteliers can not do much as the vast majority of bookings are via the Internet and almost last minute. For the summer tourist destinations, however, what the hotel sector does is with offers to “fill the gaps” of the next days in an effort to maintain the highest possible occupancy until the end of September and October. Crete, Rhodes, Kos are destinations that remain “open” until almost November.

This year, as estimated by market players, September and October may be “strong” months, given the vaccinations in a number of EU countries, such as the Netherlands and opens the way for more citizens to travel. It is estimated that those who are more in the mood for travel are the vaccinated citizens of EU countries and this, unless there is something particularly worrying about the course of the pandemic, will be expressed in the next two months.

It is pointed out that September so far remains dynamic as the occupancy of hotels in popular destinations remains at the level of 80% of 2019, while in Athens any forecast is risky as the market of the capital does not work with tour operators. At the moment the occupancy in some units is at the level of 50% however it is difficult to predict what will happen in the coming weeks. However, as is competently clarified, there are also units that are a category in themselves, such as e.g. Asteras Vouliagmenis where the fullness is at very high levels.

What hotel agents also monitor on a daily basis is the course of the pandemic. Although they note that European governments have significantly eased measures, especially for those vaccinated, they continue to fear an outbreak of the pandemic that will force them to tighten restrictive measures. 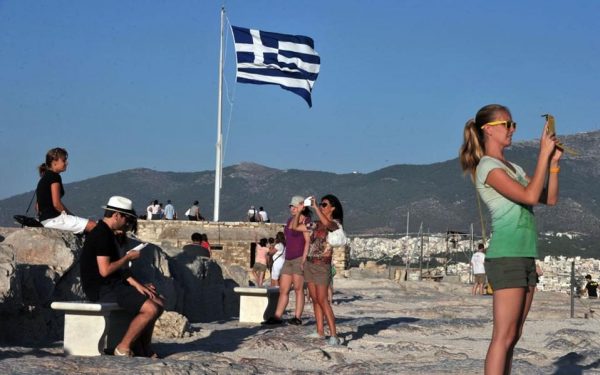 However, the returns of Greek tourism so far are considered very satisfactory.

According to Fraport data from the 14 airports it controls, international arrivals in August of this year came to 80% of the arrivals of August 2019 which means that on an annual basis at the 14 airports arrivals are now over 50% of 2019 .

If September and October move in tune with August (-20% compared to the same months in 2019) then the air passenger traffic will reach 60% of that of 2019. Among the popular destinations that stand out in August is Santorini which also this month as in July had more passengers (+ 6%) than in August 2019, while Mykonos did very well (-10% compared to August 2019) compared to the other islands.

So, given that this year the travel expenses per trip are higher and the total income for our country from such will be higher for the same number of arrivals compared to 2019.

This increase is confirmed by international studies. The prices of hotels, mainly luxury and five-star hotels, increased this summer in popular Mediterranean destinations, according to a study by Spanish Mabrian Technologies which was conducted in more than 73,000 hotels.

Greece is, by far, the Mediterranean destination that has recorded the largest increase – + 31% for four-star hotels and + 47% for five-star hotels. Turkey is a country with the smallest increases while it also records a drop (- 4%) in three star hotels.

KINAL – The government is handing the PPC over to private interests

“They are paving the way for the transfer of the main pillar of our energy system”, the Movement for Change (KINAL) has accused the government

Greece is high in the preferences of Europeans for autumn trips

Coupling of Greece’s electricity market with Italy and Slovenia

The next milestone in the convergence of the domestic with the neighboring electricity markets is the start of operation of the continuous intraday market on the Greek-Italian border and between Greece-Bulgaria in 2022.

KINAL – The government is handing the PPC over to private interests

“They are paving the way for the transfer of the main pillar of our energy system”, the Movement for Change (KINAL) has accused the government

ATHEX – Fall under the weight of PPC

Greece is high in the preferences of Europeans for autumn trips

The pandemic may be showing signs of stabilization in the rest of the country, but the same is not the case in Northern Greece. Gikas Maiorkinis spoke about a “worrying exception”

Angry with US, Biden, Erdogan warns he will pursue closer strategic ties with Russia

As regards a spate of lawsuits - filed against teachers and healthcare workers by deniers of the vaccine or of COVID-19 self-tests, and even masks - Interior Minister Makis Voridis described the legal action as “groundless and meaningless” 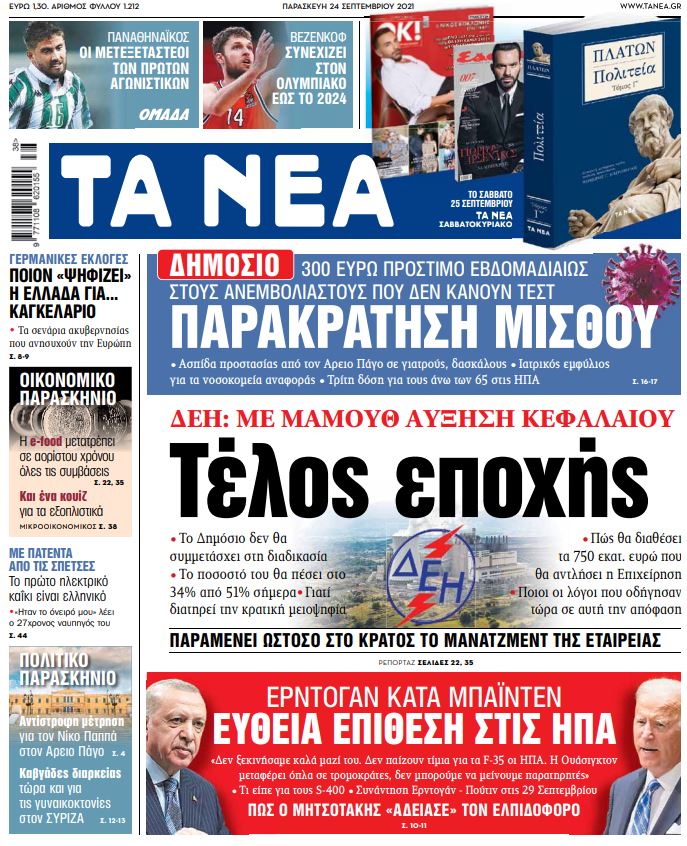