the Greek Priome Minister, Mr. Kyriakos Mitsotakis, spoke with the New York Times journalist, Steven Erlanger, at the Athens Democracy Forum. What he said about the agreement with France, the coronavirus and the immigration.

The Greek Prime Minsiter, Mr. Kyriakos Mitsotakis, referred to a number of issues in his discussion with the New York Times journalist, Steven Erlanger, at the Athens Democracy Forum.

The journalist, initially, asked about the agreement with France. The Prime Minister stressed that the agreement allows the two countries to defend each other, if necessary, while noting that this agreement does not change the fact that Greece participates and supports NATO.

“We have a strategic partnership with President Macron. There is the clause on mutual defense assistance, which states that in the event that either party is attacked, the other one is going to help. This clause symbolizes the commitment of France, but also its interesst in the Eastern Mediterranean region”, stressed Mr. Kyriakos Mitsotakis.

The Greek Prime Minister noted, also, that Greece had not strengthened its navy for decades. “We got the frigates at the best price and at the best delivery time,” he added.

“The agreement is in line with NATO guidelines on upgrading the defense capabilities of its member states. It is my duty to defend my homeland. It is also an attempt ftom the EU to defend its interests in areas where NATO does not want to get involved, without the approval of the North Atlantic Alliance. We are ready to sign the extension of the defense agreement with the USA for another 5 years. There is no competition between the US, France and Greece, these initiatives are complementary. We are very proud to be members of NATO, it is by far the most successful alliance”, added Mr. Mitsotakis.

“There are big differences with Turkey, but we want them to be resolved peacefully,” he added. He stressed, however, that the country needs to be strengthen its defence, while referring to Ancient Athens which was a great naval force.

“These investments are within the existing fiscal framework of the country and in no case are they made to the detriment of our other priorities,” the Greek Prime Minister clarified, answering to another question. 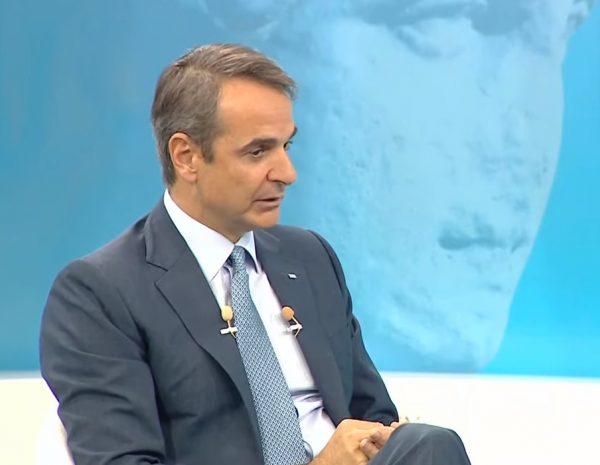 The  Greek Prime Minister said he doesn’t regret defending his country’s borders during the Evros crisis. “In March 2020, Turkey instrumentalized the migrants, we resisted, we protected our borders and we continue to do so in a way that fully respects human rights,” he noted.

The Greek Prime Minister then addressed the issue of Afghanistan. He said that Greece will cooperate with Turkey for the refugee flows that will arise after the domination of the Taliban. He noted that Turkey “can do more” than it does in the context of the agreement with Europe.

Mr. Mitsotakis stressed that some European countries do not recognize the problem of immigration. “This is not fair” for Greece, he added.

“In addition, we addressed the issue of unaccompanied minors, tomorrow I will visit the new Reception and Identification Center of Samos. It is not contradictory to defend your borders and respect the human rights at the same time”, Mr. Mitsotakis stated and then added:” We have every interest to work together with Turkey and to dismantle the trafficking networks.

I believe that Turkey can do more. It can, for example, accept the returns, a clause stated in the EU-Turkey Joint Declaration. This is somtehing they do not do for the time being and the number of  people that should be returned is about 2.000. The EU has made it clear, however,  that what happened in 2015 is not going to happen again.”

Mr. Mitsotakis then referred to Europe, saying that: “At the same time, of course, there is a deficit of European solidarity, which means that an agreement on the new Immigration and Asylum Pact should be made. However, I am not very optimistic about this issue at least for the foreseeable future “.

Concerning the coronavirus and the vaccinations

The Greek Prime Minister said that vaccinations have not been politicized in Greece as much as in the USA. He noted that the government is trying to persuade those who have not been vaccinated to do so.

“We lag behind the European average,” Mr. Mitsotakis admitted, but the efforts continue. He stressed that Greece can do better.

“The issue of vaccination has not been politicized in Greece as much as in the USA. I must say that in this matter we did not have the necessary support of the opposition”, said the Greek Prime Minister when asked about the vaccinations against the coronavirus.

“We know we can increase the vaccination rate, we lag behind the European average. We will not impose further vaccination requirements, but I want to be clear: Unvaccinated people will not be allowed indoors in enclosed spaces, such as restaurants, bars, cafes, and stadiums. “As we enter October, I believe that those who have not been vaccinated yet, especially the younger citizens, will reconsider it and get their jab,” added Mr. Kyriakos Mitsotakis. 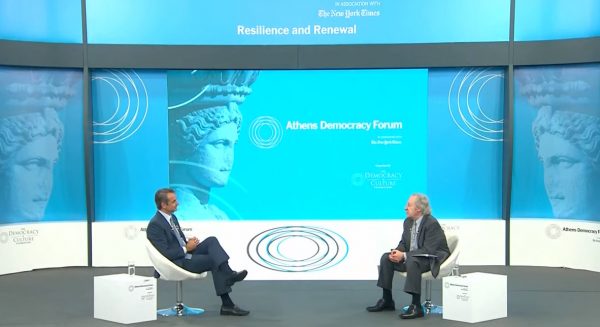 The Greek Prime Minister noted he is glad that many tourists from America arrived in Greece with direct flights from the USA, after a relevant question asked by the the New York Times journalist.

Regarding the Prespes Agreement, he noted that he did not vote in favor it, but will respect it, as he has stated in the past.

Concerning Germany and the money of the Reconstruction Fund

Mr. Mitsotakis spoke, also, about Germany, after the recent elections and the attitude of the Central European country towards the situation in the European Union. The Greek Prime Minister stressed that the money of the Reconstruction Fund are going to be used in the most efficient way.