A massive number of mourners gathered outside of Athens Cathedral today to bid farewell to the beloved composer Mikis Theodorakis, who died at age 96 and left a deep imprint on the Greek soul and national consciousness, at the funeral.

He is remembered as a fighter for freedom, a fighter of the National Liberation Front (EAM) which was the main resistance movement against the Nazis, a fervent enemy of the 1967-74 Greek junta which exiled and tortured him and banned the playing and singing of his songs throughout the country, a proponent of Greek-Turkish friendship, a fervent supporter of struggles for liberty around the world, the man who exemplified the sacred and mystical marriage of music and poetry and rooted Greece’s towering poets in the hearts and minds of the Greek people, a unifying symbol for the Greek nation.

Inside were gathered top state and political leadership along with family and friends of the composer.

After the Greek Orthodox funeral service conducted by Archbishop Ieronymos, emotionally charged eulogies delivered by President Katerina Sakellaropoulou, who placed a single white rose on the coffin, and Greek Communist Party General Secretary Dimitris Koutsoumbas, repeatedly drew applause (mostly fervently for Koutsoumbas, to whom he had written that he honoured his communist past and wanted to leave the world as a communist.

“Today, we bid farewell to Mikis Theodorakis, all together, of all ages and all generations. Those who shared experiences with him, and those who embraced his songs as a call to transcend the individual and converge with others, as a code that went beyond any particular confluence of events, signaling resistance, hope, camaraderie, the collective pursuit of goals. Along with the older among us, the younger generations, children and youngsters, bid him farewell.

She described as an “educator of the nation,” who with the spirit of struggle, his torrential force, and indomitable spirit managed to break through our “national loneliness” and gave us “the invaluable myth of his music” – a trumpet call to make the dream a reality.

“He broke through the borders of our national solitude, defeatism, and discouragement. Pairing the national with the universally human, he showed the path toward forging our Modern Greek identity. He gave us the invaluable thread of his music so that by unraveling it we would return to the light of democracy and turn his trumpet call into action and polity, offering an accounting for our history. He declared his presence at every turn of our national adventure. He always transformed the historical moment through the characteristics of his distinctive, intense personality, leaving an indelible mark on Greek life. He became and will always be a powerful cultural symbol because in his person and creations there merged some of the most enthusiastic, effusive, and visionary elements of Modern Greek identity.”

“With respect and emotion, on behalf of all Greeks, I bid farewell to Mikis Theodorakis,” she concluded with an emotionally charged tone.

Dimitris Koutsoumbas, whom the late composer had essentially asked to deliver the eulogy when he wrote to him that he wanted to leave the world as a communist, spoke with more personal and emotional language, addressing the beloved composer in the first person, and he was repeatedly applauded loudly by the crowd of mourners outside the cathedral.

‘Comrade Mikis, you are ‘the light that treads happily on Hades’

Koutsoumbas borrowed from famed poet Yannis Ritsos’ poem “Romiosini” (essentially universal Hellenism), which Theodorakis put to music, and the song, close to the heart of all Greeks, still symbolises national strength and resistance.
Speaking of the “saga” of Hellenism and the Greek people, the leitmotif of Koutsoumbas’ eulogy was that, “Without Mikis, we would be different.”
“Upon your coffin, Greece raises its fist and becomes ‘stronger and furious’!” Koutsoumbas proclaimed, quoting the late, great communist’s poem.

“Comrade Mikis, you are the ‘light that happily treads on Hades’! A revolutionary light, on the left side of the pinnacle of Mount Olympus – a light that ‘shines brightly everywhere’ as the German press said over the last few days. A light that burns. “A ‘child of necessity and a mature offspring of rage!’ ”

“When tonight the ship sets sail from Piraeus, to travel across the blue waters of the Greek sea to take you to your final resting place, in your ancestral homeland of Galata, Chania, in your beloved Crete, in accordance with your final wish, all of Greece will accompany you with your songs. Because for you, to borrow from a line from the grandeur [of Greece’s greatest poet, Dionysios] Solomos, ‘The heavens were proud and the earth applauded.’ Immortal, Mikis!”

Another 33 related deaths were also reported on the day, bringing the death toll since the advent of the pandemic to 14,466.

The main opposition leader and former PM began by accusing ruling conservative New Democracy of neglecting the youth and blaming it for all the ills of society, such as the “corona parties” that trigger the super-spreading of COVID-19.

'The best thing we can do is to combine wearing masks and frequent testing in order to ensure that schools will open with the greatest possible degree of safety, but they must be augmented by a rise in the rate of vaccination.,' the PM said.

Another 33 related deaths were also reported on the day, bringing the death toll since the advent of the pandemic to 14,466.

The main opposition leader and former PM began by accusing ruling conservative New Democracy of neglecting the youth and blaming it for all the ills of society, such as the “corona parties” that trigger the super-spreading of COVID-19.

SYRIZA underlines that the average percentage of workers in Europe covered by collective bargaining contracts is 60 percent and that in Greece it is currently just 14 percent. It maintains that the percentage will drop further due to provisions in the new labour law.

'The best thing we can do is to combine wearing masks and frequent testing in order to ensure that schools will open with the greatest possible degree of safety, but they must be augmented by a rise in the rate of vaccination.,' the PM said.

'I have instructed the Greek Embassy in Ankara to deliver a strong demarche regarding Turkish harassment of the research vessel “Nautical Geo” as well as the issuance of an illegitimate NAVTEX. This continuing stance on the part of Ankara is entirely unacceptable,' 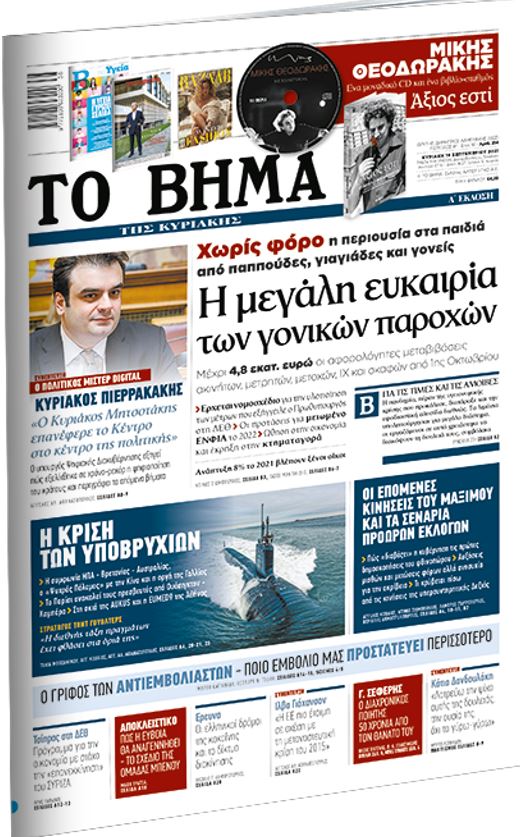